By Jazmine Hughes
Hosted by Cosmopolitan.com

Like all good things, it started at brunch. It was a bitter January, before Empire even premiered and the idea that I would ever wear a leopard-print fedora was even a possibility. I was sitting in a restaurant, sipping my tea and absentmindedly checking my email, patting myself on the back for the biggest accomplishment of my life so far — going to two brunches on the same hungover Sunday morning — when a hiring editor at the New York Times magazine emailed me about a job opening. I choked on my tea.

Several weeks of interviews and edit tests followed, but through it all, I kept thinking: There’s no way I’m going to get this job. Most of this anxiety was rooted in not looking and feeling the part: For one, I’m not a white dude. My career is relatively inchoate; my editing experience meager. I don’t speak any other languages. I didn’t go to an Ivy League … I can barely spell the word “February.” It seemed totally unlikely, so I forged ahead, practically insouciant, convinced I had nothing to lose because I didn’t have much to offer.

Then, one afternoon in March, the editor-in-chief called me and offered me the job. He paused a little for dramatic effect; waiting for Ashton Kutcher to pop out, I did too. I finally gurgled some approximation of “thanks” in response, but what I really wanted to say was: “How dare you make me make such a life-altering decision on the day of the season finale of Empire?“

Empire is not a particularly good show — it’s highly implausible, cloying, sometimes preachy — but it’s an absolutely perfect one. I started in the middle of the first season, gobbling up each episode like the decadent treats they are until I was finally all caught up. I found at the center of the show, sweetest of all, there is — and forgive me for this — a pretty tough Cookie.

Taraji P. Henson’s portrayal of Cookie is rich and luxurious, both out-of-this-world fabulous (she left jail in a cheetah dress and a fur, exactly what I want to be buried in) and around-the-corner familiar (every black person has a cousin called Cookie, for reasons we will never explain). Ever confident, Cookie’s primary goal is to reclaim her space; her mission, known from the first episode, is “I’m here to get what’s mine.”

I’m now six months into working at the Times — markedly less full of anxiety and ineptitude since day one, but despite working with the kindest and most attractive people in journalism, I’m still pretty uncomfortable. I love my job, but there are still days where I’m convinced I don’t belong, racked by the fear that someone is going to find me out and show me the door. This is called impostor syndrome, which I know a lot about (I’ve even written about it): a state in which a person isn’t able to accept their accomplishments, chalking it up to luck or a mistake. But what I like to think I have is an enhanced impostor syndrome: a state in which a person goes, “No, I know about impostor syndrome, I’ve actually read the entire Wikipedia page, but this definitely isn’t it, I actually am completely incompetent.” (But that’s just … impostor syndrome.) Either way, I figured: Hey, if Cookie can regain the space she’d lost, then maybe I can carve some space out for myself.

Dressing in Cookie’s finest was a departure from my usual garb, what I like to call “background actress in a nonspecific media setting” — Warby Parkers, a blazer, T-shirt, skinny jeans, Converse. I brought a pile of clothes home from Cosmopolitan.com HQ on a Friday night after warning my desk mate about my imminent new look. I began my Monday commute in piles of jewelry, a leopard print skirt, and leather shirt. People were mostly unimpressed by me on the train, but I was impressed by every woman who’s ever gotten through an entire day in giant heels. My entire life flashed by, sad and pimply, through my 40 bar-holding minutes standing in platforms. 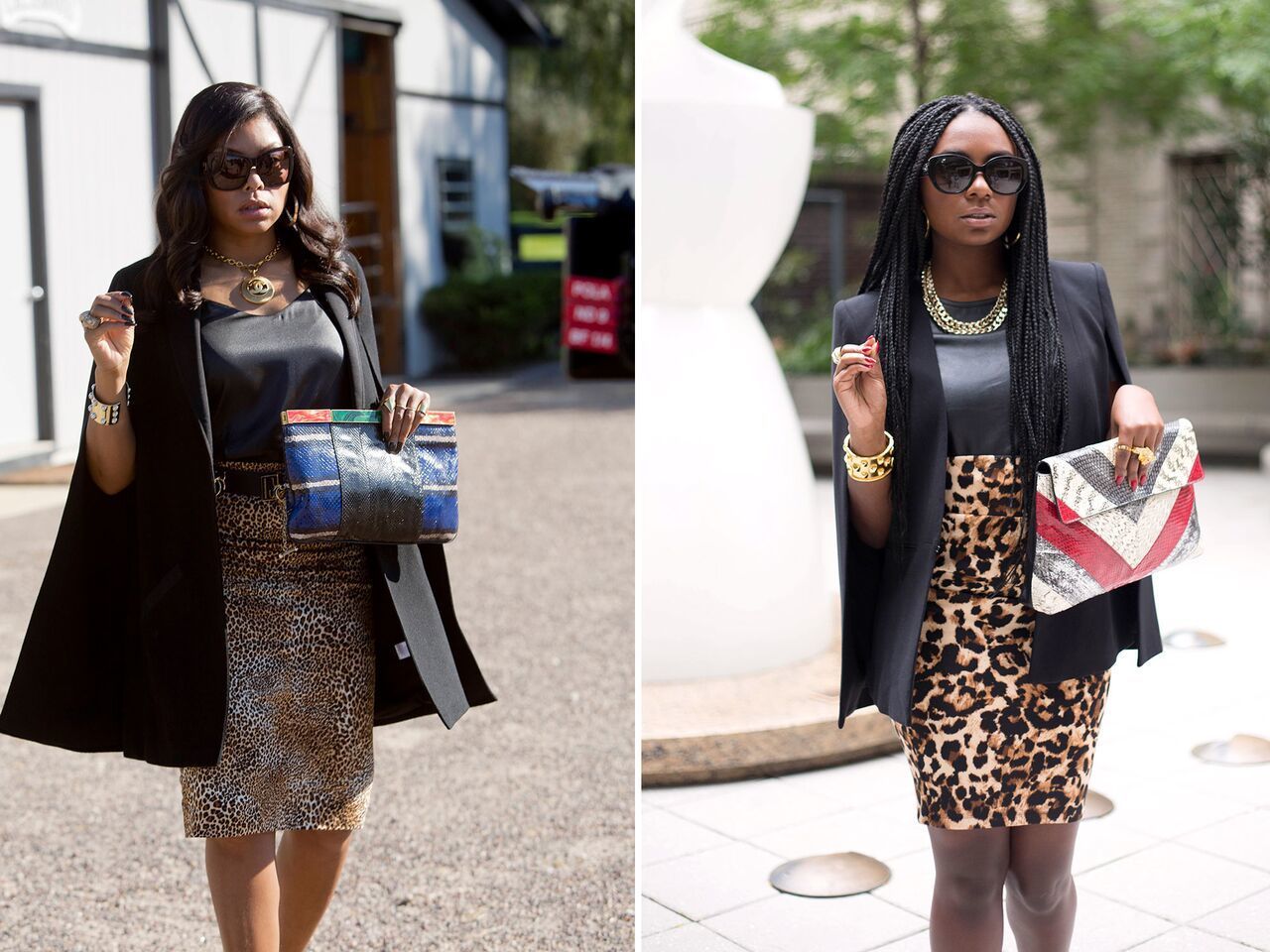 FOX/Kathleen Kamphausen
This is possibly the best photo ever taken of me in my life. I don’t know how Kanye West wears a leather shirt every day. I’m schvitzing.

I stumbled to my desk. My coworkers noticed my new look immediately: tuts of approval, questions about where I bought everything. But on the second day, when I arrived in the leopard-print dress, bag, and precariously cocked hat, I had to come clean: I was doing this for an article. None of the clothes were mine. Yes, the shoes really fucking hurt. 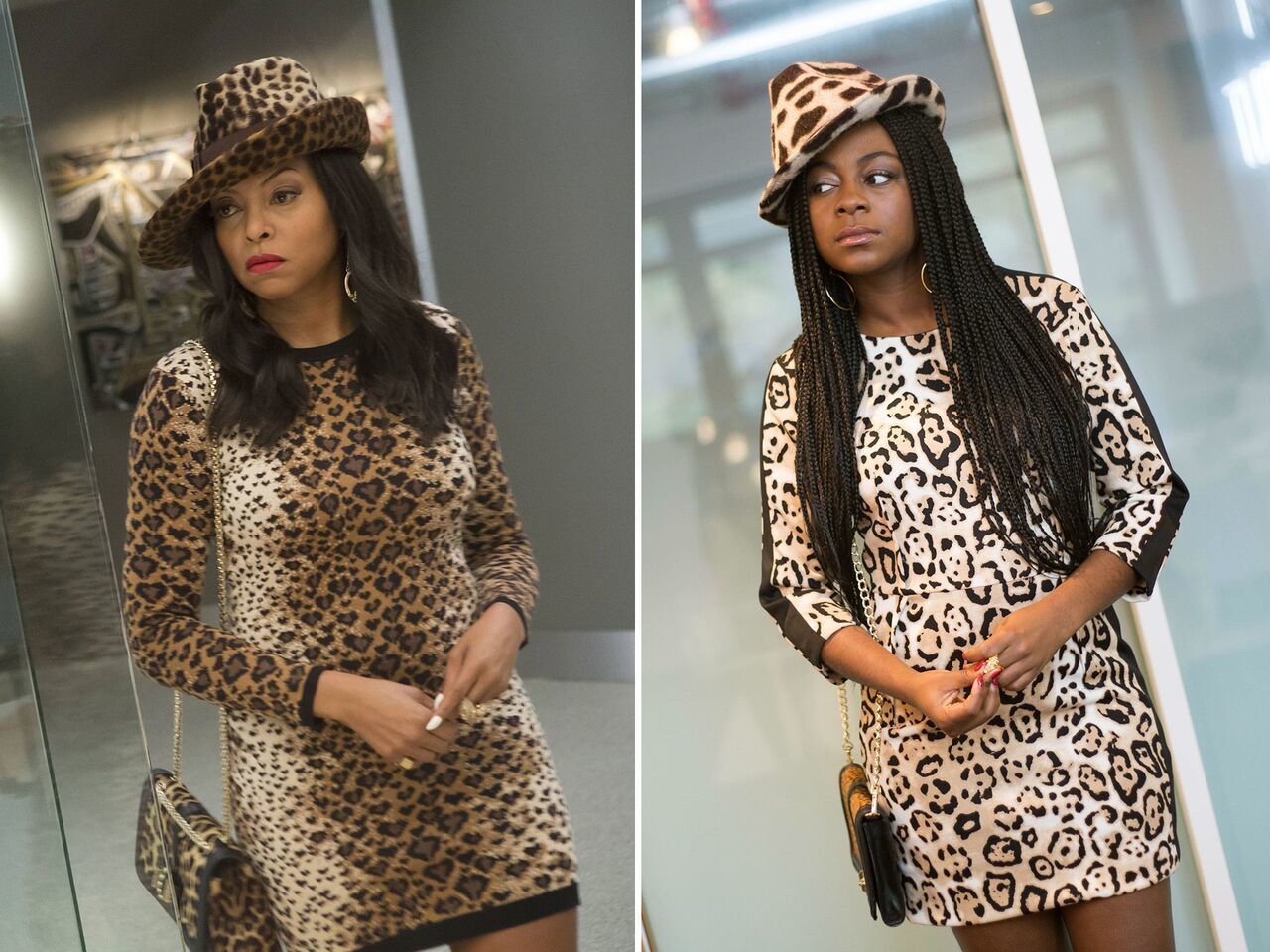