My first question is:

Why the hell did it take so long?

But then we know the reason for that don’t we. Heavier girls are worse then second class citizens, after all %54 of all women would rather be hit by a car than be fat…

Here’s the dealio, Two sophomores from Cornell University Cornell University  Brandon Wen and Laura Zwanziger have developed a plus-size dress form by WAIT for IT– actually researching the plus size figures of actual women, and not just giving girth to the smaller size fit models in the same exact proportions. Instead they took the time and energy to actually analyze body scan plus sized pear shaped women to determine where and how much curve and contour is generally needed. Kudos to them- now this was for a school project- can you smell dress line?! I know there are a lot of high end designers that will be knocking at their doors trying to get their hands on that form. It’s a real game changer. There are so many full figured women who would love to wear certain brands, but either it doesn’t come in their size or the fit is not right, and after shelling out that type of money who wants to spend more having it tailored? Hey you know the first company knocking at their door will Abercombie & Fitch

This is a win for everyone especially for the curvy girls walking the gangplank to the fitting rooms. Check it out: 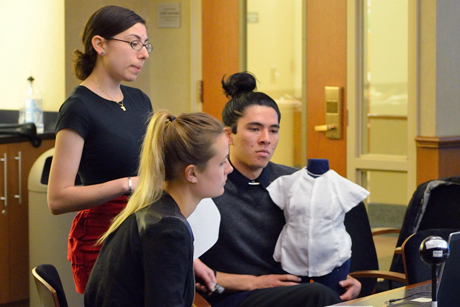 But they faced an early barrier: So few clothes are made exclusively for larger women that there’s a scarcity of full-figured mannequins available, and the few that exist resemble crudely scaled-up versions of thinner women of Barbie-like proportions. Undeterred, the students built their own plus-size dress form.

Under the guidance of Susan Ashdown, the Helen G. Canoyer Professor in the Department of Fiber Science & Apparel Design (FSAD) in the College of Human Ecology, they analyzed thousands of 3-D body scans of women to define a prototype body size and shape. The team matched it to a single scan of a pear-shaped, size-24 woman from the FSAD department’s 3-D body scanner and used it to develop a pattern for the shape and contours of their mannequin. Next they used the department’s laser cutter to slice half-inch think pieces of foam and stacked and glued the layers to create their model, a half-scale dress form that allows designers to develop prototype garment patterns that can later be replicated at full scale.

“It’s a wonderful example of using innovative technology to support design work,” said Ashdown. “Instead of just scaling up something designed for a different-sized woman, or even thinking about clothing as something to disguise a body or make a body look different than it is, the students sought to celebrate shape as it really is.”

At their final class presentation May 13, Zwanziger, Wen and exchange student Abbey Jennings unveiled their collection, called Rubens’ Women, after the Flemish painter famous for his illustrations of full-figured women. It features four jackets and a skirt and pants tailored to complement the curves of larger women.

Wen, the lead designer on the project, said he hopes such a line could alleviate the stress many plus-size women face when browsing in stores or online, where their shopping often ends in frustration due to ill-fitting clothes.

“A lot of stores won’t have plus sizes in the store, so people have to go online and find them, and it’s difficult to find them online,” Wen said. “Plus, a lot of plus-size women don’t want to shop in regular stores around thin customers; it’s a self-consciousness thing.”

The team also developed a marketing plan and even negotiated with a San Francisco-based manufacturer to develop a suggested price for their line.

They noticed a huge opportunity after their market research showed that plus-size women hold 28 percent of purchasing power for apparel and accessories, but their spending only accounts for 17 percent of purchases, according to Zwanziger.

“A lot of the clothes [for plus-size women] are really just sized up from smaller proportions, which fit really strangely,” Zwanziger said. “Plus-size women feel alienated from the fashion industry.”

Making a fashion line specifically for larger women is a very different process, but an important one, Ashdown said.

“Issues of health aside, we’re all different body shapes and body proportions,” she said. “Each person deserves to have clothing designed for them as they are, not as they relate to some abstract industry shape.”

Sarah Cutler ’16 is a student communications assistant for the College of Human Ecology.