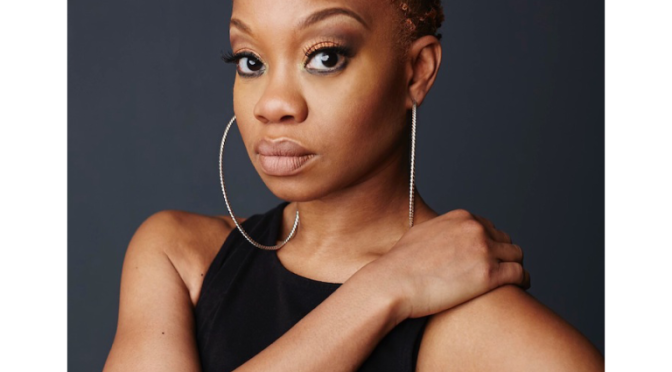 Like most good things the hashtag’s ubiquity has diluted its power. The first clue was when a it moved offline and into daily conversation where you cannot actually “click” on it and see who else is talking about said topic. As the power of the hashtag wizens so does urgency and poignancy of some of the subjects that follow the symbol. Many of us hashtaging popular subjects never use the mechanism to actually enter the larger conversation. Two of the most popular hashtags in the African American community are #blacklivesmatter and #blackgirlmagic. I often use the latter when highlighting something positive or incredible a black female has done or is doing. I’ll confess that I have never clicked into the larger conversation via the hashtag. I am guilty as I have charged, albeit I have witnessed black girl magic in real life, and in person have “clicked” into the larger conversation. That is what took place on June 4th at the National Black Theatre in Harlem New York, when choreographer/Activist Camille A. Brown held her first ever Black Girl Spectrum Symposium.

Brown herself is the epitome of “Black Girl Magic”, she’s built  a successful career as a performer and choreographer, and though the journey had found her voice (both as woman and artist) and is now creating a space for Black girls/women to connect with their own. She is dedicated to encouraging them to recognize the beauty and brilliance inherent and inherited in something as simple (yet complex) as the games they play, and dances they do. Brown is virtuosic performer, able to physically code switch from Modern, West African, contemporary ,and Social dance, but it is the latter that has become her focus. She can often be heard asking the rhetorical question “Why isn’t Social dance recognized and respected the way ballet, modern are? Why isn’t it taught in the same way with the history and the technique? Because it is technique” And she has a point. Elements of Social dance have a ways been present and celebrated (though not recognized as such) on Broadway stages. The acceptable translation of the term is “Theater Dance”

Over the last year she has artfully woven a tapestry from her expertise in the historic roots of Social Dance and the unrecognized beauty and joy of growing up a Black girl in America. These things intersected when she began work on BLACK GIRL: Linguistic Play (BL:LP) which was an investigation of her (and her dancer’s) youth, presented though the games, (social) dance and relationships Tracing the linage from the stomping rhythms of Juba (Giouba, Haiti: Djouba), to hambone hand games and hip hop, BG:LP reveals a truth seldom addressed, the humanity of Black girls. She is working on elevating these two things to their rightful place, one of sophistication, refinement, complexity, genius, and artistry. She has carefully wrapped these treasures up and re-gifted them to little black girls and grown black women around the country. Community is Brown’s legacy, and BL:LP allowed her to spin a web of connection through all the communities the company toured. The Black Girl Spectrum Symposium is the culminating result with local organizations. 60 young ladies ranging in age from 9-16 participated in a day dedicated to fortifying their development as creative citizens and leveraging the power of dance to transform, connect and activate community. Participants were selected from the organizations that Camille A. Brown & Dancers (CAB) has partnered with in New York City through BG:LP’s  Black Girl Spectrum Curriculum (complete list below). The theme of the even was (#) Social Dance for Social Change.

Brown opened the symposium with a Dance “lesson” entitled Social Dance Through Time which tracked the origins of some common social dances. She guided them on journey from West African shores, Caribbean Isles, through Southern plantations, past reconstruction to present day illustrating exactly how through all our adversity, we have like Beyonce made Lemonade, and the whole world is drinking it. She shows these young ladies the mutable endurance that is their cultural inheritance. By teaching them the breadth and brilliance they unwittingly carry in their bodies when they do the running man, the butterfly or even twerk, they are empowered.

The Symposium’s adroit workshop leaders included Francine E Ott (Moving Towards Awareness) Paloma McGregor (The Political is the Personal) , and Audrey Hailes (This Power Right Here). Each woman’s offering included interactions amongst the participants effectively creating three small communities within the larger. The young ladies were not only asked to use their bodies but their voices as well. McGregor opened her session with the participants  seeking the origin of their partner’s name then sharing their findings, while teaching a portion of a her native New Orleans Second Line, Ott spoke of the importance of mental health, and believing in yourself enough to “Assist in your own rescue”, while Hailes asked the ladies to select defining words of strength and power then physicalize them.

Not a moment was wasted, over lunch Brown sat with the ladies and shared her story of being a Black girl, dancer,  and choreographer, not just her struggles but also the revelations about herself that prompted her to create a space such as this. When the floor was opened one young lady eloquently asked how she could combat having her voice silenced at school; How do you “win” when someone makes you feel like your voice is not important? The elders in the room emotionally took her under wing, let her know that she was not “Crazy” to “imaging” this “feeling”… While muttering to themselves, that there is no real answer to that question, that they are all still working to figure it out themselves, they shared their tools with her and she was not alone.

The interactive Keynote was delivered by Maria Bauman, Dancing on the Razor’s Edge: Black Girl Prowess. In Bauman’s opening she took great care to identify the “Black Girl Technologies” that showed up in the room, amongst them she pointed out the “having of one another’s back”, and at the “I get you” reflected in a  sisterly“ Umm hmm”. She then illustrated the “Spectrum”  with a slideshow featuring the diversity that present within our community. Movement  was once again brought to the fore when she asked all to think of three words that came to mind when you think of Black Girls, they then made corresponding poses that they brought together on the stage of the black box theater. Since the sessions ran concurrently in closing the three groups showed the combinations from their respective sessions.

Where I am no stranger to the community connection that is integral to Brown’s work ( for full disclosure I have both been moderator for her after show talkbacks for BLACK GIRL: Linguistic Play and we are admittedly friends) and I am so stranger to outreach and workshops of this kind (as a teacher I have participated in many) the thing that was most unique and touching about the day’s events was witnessing both in cause and effect of these young black girls feeling safe enough to be children. Let me clarify: Brown often speaks about how too often Black girls are not seen or treated as children, but are hyper sexualized far too early which in turn makes it necessary to harden themselves from the male gaze, the projected stereotypes, the muting of their voices in schools, as well as the often harsh surrounding of their communities. This results in a loss of vulnerability, and freedom of imagination, and the inability to just play. It is the genesis of the coarseness often  associated with Black women. In the environment  of this symposium (safe, and allowing) these girls were invited, they were assisted in the removal of that heavy, cumbersome, ill-fitting armor encasing them. Their innocence, their tenderness, their baby soft skin was  allowed to breath and catch light. There was a lilting quality to their laughter, laughing with in support and joy, not at in ridicule for protection. Their voices lacked the edge that is associated with a neck roll and snap. They were not “sassy” but smart, silly and sensitive. They were are articulate in their expression and sensitive in the support of their fellow participants, they collaborated and created together. The workshops were held in “available spaces”, there were no doors or walls to separate them but somehow they did not encroach upon one another, as the girls were not “loud”. As an observer I floated freely through the sessions,  a witness. All the while I was trying to put my finger on this feeling I had that was at concomitantly familiar and vague… then it struck me. For the first time I was seeing little Black girls whose outsides match their insides, they wore their softness, and vulnerability like beautiful robes. They were the antithesis of their stereotype, they were simply little girls dancing, playing, sharing…

As a child I was fortunate enough to have a childhood, but as an adult I have watched the eradication of it sweeping through our country like a plague. American children Black, White, rich, and poor alike are being stripped of this magical time, forced to grow up too fast and face adult realities too soon.sometimes as product of socio-political prejudice and poverty, sometimes it’s the barrage of information and marketing directed towards them. Historically, Black children in America have had to be acutely aware of themselves and the effect of their Blackness on others, and adroit at navigating the hostile space that is their country. This doesn’t leave much time for play, naiveté or faux pas. Through everyday dance, Social dance, Brown has been able to not only give these young Black girls their space, safety and the luxury of play, but she has also given them a linage, and legacy that enables them to honor the Black Girl Magic within them. This is the meaning of #SOCIALDANCEFORSOCIALCHANGE.  And while we all click “Like”, “Share”, “repost” “Retweet” and adopt the hashtag, let’s not forget to “click” into the actual community and truly join the conversation, or better yet the action.