Now this is want 42 looks like and it looks damned good! There is nothing wrong with it, nothing needs to be erased or “corrected”. She looks like a real person not a wax figure or a painting and if you bumped into her on the street, she might even look like the cover, she might look like her real life self. Well I guess the magazine is called Intelligent Life for a reason, they are smart enough to know Blanchett with a smile line or too is flawless in her natural state! Kudos! 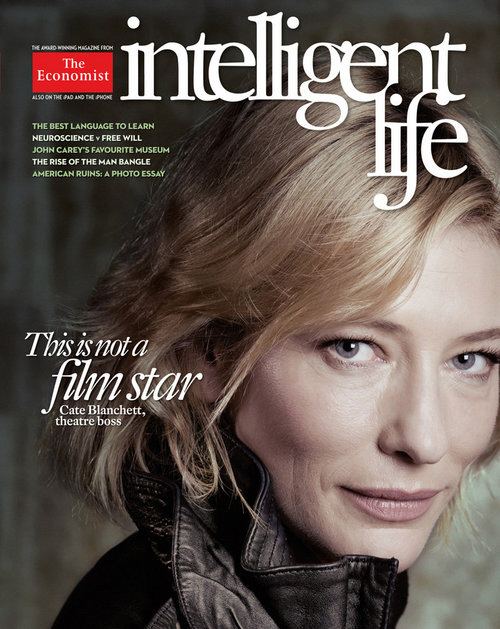 he magazine’s editor, Tim de Lisle, explained the reasoning behind the un-retouched image in his editor’s letter:

“When other magazines photograph actresses, they routinely end up running heavily Photoshopped images, with every last wrinkle expunged. Their skin is rendered so improbably smooth that, with the biggest stars, you wonder why the photographer didn’t just do a shoot with their waxwork.”

Oscar-winning Blanchett talks of her job as joint artistic director of the Sydney Theatre Company and return to Europe to star in an Australian production of a German play. She posed for the cover quite simply, in her working clothes.

“She looks like what she is” continues de Lisle, “a woman of 42, spending her days in an office, her evenings on stage and the rest of her time looking after three young children.

‘We can’t be too self-righteous about it, because, like anyone else who puts her on a cover, we are benefiting from her beauty and distinction. But the shot is at least trying to reflect real life. It’s a curious sign of the times that this has become something to shout about.”

I wish we could see more of this or less of the overly photoshopped pictures that are pasted on the covers and in the editorial pages of magazines. There is nothing wrong with a crease, or wrinkle, or even a bulge, it could serve to remind readers that even stars, or models are not impervious to the physical evidence of life lived, because they too are human and that is normal. Perhaps if this became a norm we could all start to let go of this unrealistic expectation of perfection that we are on running towards on a habitrail getting nowhere fast!