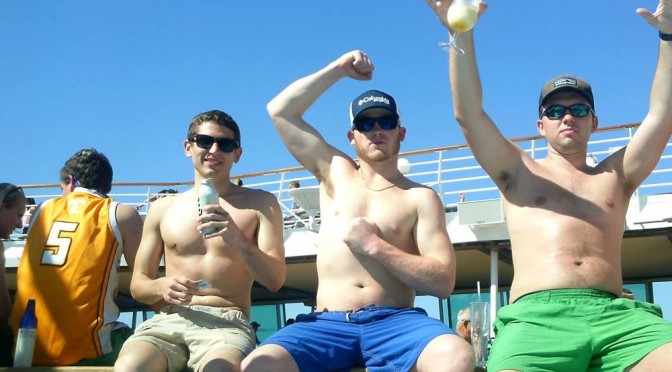 AS IF WE DIDN’T KNOW IT ALREADY but apparently we women are ALL about what is being called the “Dad” Bod. Just in case you are not “on Fleek” with the new trend or have no idea what this new fad is here is a definition of Dad Bod:

The dad bod says, “I go to the gym occasionally, but I also drink heavily on the weekends and enjoy eating eight slices of pizza at a time.” It’s not an overweight guy, but it isn’t one with washboard abs, either.

I’m not a dad but I’m out of shape like one.

The most unbelievable about this Dad Bod nonsense is that THESE MEN DON’T EVEN HAVE TO BE DADS! They can just look like they do…which according to the description is drinking and eating in excess and playing a ball a bit in on the weekends. Is that like that commercial “I’m not a doctor but I play one on tv”? I’m not a dad but I’m out of shape like one. It’s just a bit too convenient and fits comfortably into that time honored and upheld gender double standard. Women have to be superhuman (give birth to humans) and be flawless to be worthy of love while men get to be human, hence, flawed yet get to be loved, and accepted for who, and how they are. Women are not afforded this generosity, perhaps the fact that men can rest assured that no matter what they look like women will love them and find them sexy is a testament as to why we are considered the fairer sex. We are not weaker,  but we are more compassionate.

Here are the reasons stated as to why women (that’s us—BTW no one asked me) prefer the Dad Bod:

We like being the pretty one.
We love people saying“ its they look cute together.” But we still like being the center of attention. We want to look skinny and the bigger the guy, the smaller we feel and the better we look next to you in a picture.

Better cuddling.
No one wants to cuddle with a rock. Or Edward Cullen. The end.

Good eats.
The dad bod says he doesn’t meal prep every Sunday night so if you want to go to Taco Tuesday or $4 pitcher Wednesday, he’d be totally down. He’s not scared of a cheat meal because he eats just about anything and everything.

You know what you’re getting.
Girls tend to picture their future together with their guys early on. Therefore, if he already has the dad bod going on, we can get used to it before we date him, marry him, have three kids. We know what we are getting into when he’s got the same exact body type at the age of 22 that he’s going to have at 45.

Nice Try! Why do these reasons make women sound insecure and vapid? Why can’t we just switch the profound and be done with it?