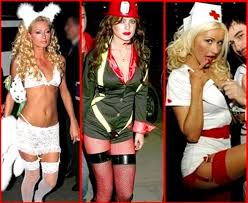 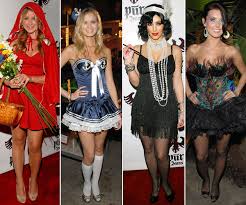 What ever happened to the ghouls and goblins, and dismembered body parts that used to be the best part of Halloweens of old? When I was a child I can recall store bought costumes with the badly sewn jumpsuits that tied at the neck, and the oversized masked that always reeked of plastic, and got all sweaty and moist inside after a few minutes. I recall the homemade costumes, the shredded and tattered clothing, the amateurish face painting- often white based (to make you look dead or ghoulish), black eyeliner and shadow to hollow you out and red lipstick and store bought liquid blood to add the gore. The point was to be scary, gross or ironic perhaps even all at once. Sure there were a fair share of Fairy Princesses, and Disney characters hell I was a ballerina for 12 years in a row (I can’t tell if it was just because I so wanted to be a dancer, or if I was just lazy and pulling out last years recital costume was a no-brainer) Yes there were doctors, nurses, firemen, policemen, all sorts of animals, and of course there were always the monsters Dracula and maybe a Frankenstein, monsters were made for Halloween. Perhaps it’s the nostalgia of age but there just seemed to be a bit more creativity involved in Halloween back in the day.

The question I posit to you today is: When did Sexy become the new Scary? It seems that every female, young and mature have to be the sexy version of a Halloween character- The Pirate is now a Sexy Pirate, the Vampire a Sexy Vampire, the Corpse is a Sexy Corpse. Fish nets, push up bras, and platform stripper heels are the must haves for playing dress up theses days. It seems that everyone looks more like a stripper at a theme club then a fright night apparition. Gone in is the gore and the irony the actual spirit of the scariest night of the year, everyone is too busy trying to be “hot”. It has become predictable and boring, at least where the women are concerned. Men on the other hand have maintained the right to be gruesome, or silly, and make utter fools of themselves, often times by mocking women as dressing in drag. Drag is a surefire way to be the life of the party. Whether they look horrible as a woman or they look frighteningly good, a straight man in a dress and heels will always be a hit- at least to his friends.

Last week I started a poll amongst my older students I wanted to see where their heads were in terms of costume ideas, sure enough when I asked many of them were going to be the “sexy” version of a spy, vampire or something or other. Some seemed stuck at how to “Sex” up their idea. I had to giggle to myself. Then I remembered two students I had a few years ago (then in High School) they as well as their whole families were into Halloween on a grand scale. That year the two friends had plans of being Jack and the Beanstalk- literally the shorter of the two was going to be Jack and the taller, the Beanstalk. Let’s face it there is no way to make a beanstalk sexy.  I thought that was really cool, and they were so excited about it too. It would be great to see that sort of ingenuity continue into college and beyond. One little girl in my class this year (she’s about 9) asked if they could wear costumes in ballet class, she was concerned because she was going to be a woman in a painting, and you see the frame would be a bit cumbersome in dance class. This is what I remember, the costumes that won prizes for being inventive but were impossible to sit or go to the bathroom in with out assistance.

As I surf the web an early costume choice for a number of celebrities has already been that of the Svedka robot, basically a unitard with the robots body superimposed on it (and some platform heels) clever. I am sure there over this weekend there will be a plethora of pictures of female celebrities in short, tight dresses, in fish net hose with their breasts pressed so firmly together that they look like a newborn’s bottom, bearing up against the weight of hair weaves and wigs and teetering on the ubiquitous stripper heels portraying some vixen-ized version of scary characters and all looking like they are trying way too hard. And then there will be Heidi Klum and her husband Seal who seem always to be clever and inventive with their costumes, and enjoy being silly or looking foolish for an evening. 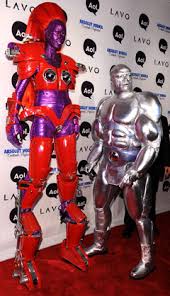 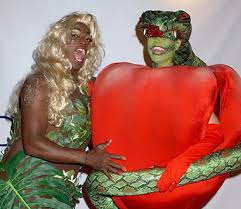 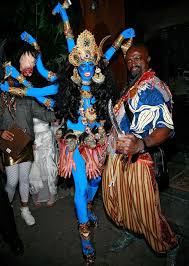 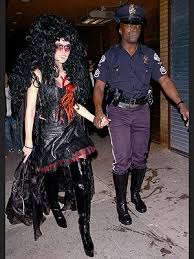 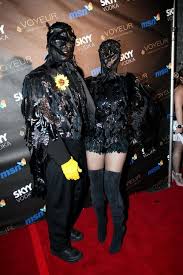 Personally I will be going as the same thing I have been for years, no not a ballerina, an Angry Black Woman….