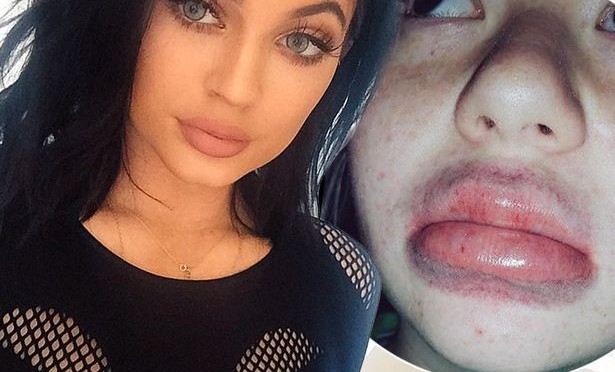 This is the most asinine thing that I have ever heard and seen. So Kylie Jenner the 17year old unsupervised, high school drop out, who has been rumored to be dating a 26year old rapper Tyga, this young lady (I stress young, I stretch lady) ceaselessly posts provocative pictures of her body, which appears to have been surgically augmented, breast, buttocks, and lips which brings us to this idiotic “challenge”. Ok so apparently Jenner says that she has not had lip injections and her brother in (common) law says that it take her 40 mins to plump her lips every morning…. Thus people in the internet created #KylieJennerLipChallenge  where they try to emulate the temporary augmentation that Jenner subscribes to DAILY (to perfection and with scary consistency) by placing a bottle or glass over their mouths and creating suction. This draws the blood to the lips, but if over done (like once too hard) it can have horrific results…

I know I shouldn’t judge, but how exactly do you spell DUMB ASS?

There is so very much wrong with this. First of all  here is some life advice: if you are going to cheat on a test, never cheat of of the stupidest person in the room!!

That’s  harsh, I know It’s my frustration, but it is not truly meant for Kylie because she is a child and thus a victim of the values of her mother/manager ( and subsequently her family) and their twisted sense of values. Their influence on pop culture, and our willingness to engage, support and exalt all of their vapid, materialistic, superficial, narcissistic ways are ubiquitous .  This little girl had no choice in what she has become, she was never parented she was managed and marketed since she was 8 or 9 years old. She is only following through on what she has been shown and taught her value was determined by her sexualization,  “followers”, ‘ hits” how much press you get, and how many people want you to hawk their wares. She was reared to be  an indefatigable attention seeker. She has grown up in a family where the augmentation of the body is a rite of passage. * note I have nothing against plastic surgery I DO take issue with minors having extensive work done.  I take issues with DOCTORS who would operate on a minor implanting breasts or butt implants. I have no works for a mother or father who supports such desires that may well border on body dysmorphic disorder. The doctor THAT child needs to see is a therapist.

What really gets my goat, is that if ANY ONE OF US, We 99%ers , allowed our child to drop out of school, run around the world unsupervised, allowed them to alter there bodies,or engage in statutory rape, we would be in jail, our child would be taken away and placed in foster care and we would have to go through hell, high water and a social worker to get them back. There have been parents arrested for allowing their children to get tattoos and drinking!!!  yet both Kylie and Kendall have been seen partying with impunity in clubs when they were 15 and 16 years old. It’s really not her fault that she is misguided, unguided rather and I /we should have compassion for her, pity her in a way because it sad. It’s sad that she doesn’t think that she is enough- that someone never told her that she was perfect and beautiful just the way she is. No one ever gave her the chance to test her intellect by doing well in school.

Sure some will argue “But she’s rich and famous and living a fabulous life don’t hate”… yeah money fame and fabulous don’t make you like yourself, they don’t necessarily make you happy, or a decent person. But then again those are my values… And I’m not trying to hate I’m trying to educate.  If our youth need someone to emulate, or take up a challenge to be like try  Disney star Zendaya who exhibited such class and grace when her image was attacked by Fashion Police’s Guliana Rancic, or The Hunger Game’s 16-year-old Amandla Stenberg who’s video schooling people on the appropriation of black culture is on point, insightful, intelligent and epic. (It also would be apropos as the Kardashian/Jenner clan have built their empire on the appropriation of black culture…Just a thought