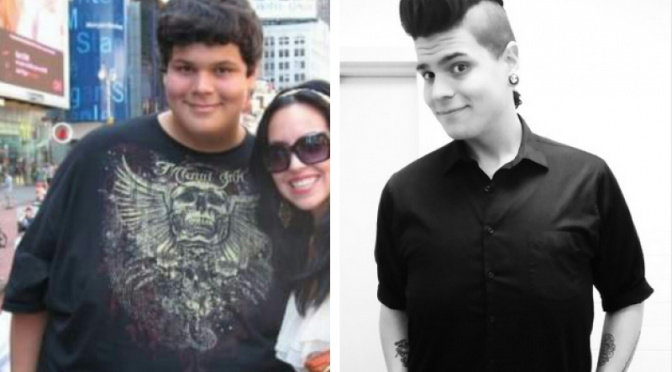 “I’m really scared to put this up,” he says in the emotional video, “I’m scared people won’t find me attractive anymore. I’m scared that all the nice messages will stop. I feel this all the time.” ~Matt Diaz

“I think it’s important for me to share this with you guys … because this is who I am. I can’t preach body positivity and hide who I am,” I wanna control and like about myself the things that I can. But the things that you can’t fix you have to make peace with.”~Matt Diaz

You might have seen this video of Matt Diaz going around the web in the last few days.  When he was 16 years old, he weighed 495 pounds. Over the last six years, he’s managed to lose 270 pounds, which is fantastic, for his health, and you’d think that it would also boost his body image. But the truth is Matt still hides beneath is clothes, not because of excess weight, but now because of the excess skin that was left behind after he lost it.

When a person is obese for a long period of time the skin has to stretch to accommodate the extra girth, it eventually loses its elasticity and when the extra weight is lost, the flesh no longer has the natural ability to retract. The person is left with the hanging skin that is impossible to get rid of but for surgery.

Matt was brave enough to make a video that showed what his unclothed body looked like, and shared the conflicted feelings that have come with it. Where he lost the weight and some of the body issues that came with that, he traded up, for the issues that come with his smaller frame and excess skin. Many people who have won the battle with obesity like Matt, find themselves on this fresh battlefield in the aftermath. This one however is harder to win as it is not just about portion control, working out, and discipline, this one boils down to financial  resources. If you can afford the surgery, then you can cut away the constant reminder of who you were, the pain that came with it (physical and emotional) and start to heal, or you must face it every day and live in and with another form of “shame” and be judged once again in a different way.

I am so glad that Mr. Diaz was courageous enough to show and tell the world his body story, not because we need to see it, because in today’s fast paced media world there are so many spectacles and tomorrow the world we be on to the next one, no I am glad that he shared for himself. When he posted that video he came out of hiding and let light cast out the darkness of his self imposed shame. When he clicked “publish” he did not merely release a video into the world, but his fears as well, he will be able to heal by knowing through the responses that he is not alone, he is accepted, he is “Okay”, beautiful, handsome, sensitive, worthy of love and kindness, and support. Which he has received a great deal of, by the end of the week I am sure that he will have raised enough money to have the surgery, and that would be a healing. In my opinion by showing the world who he is, inside and out, he has already received the greatest healing of all.