When we think of photoshopping we think of a picture being altered to look better in a very specific way. We think of waistlines and thighs being reduced or wrinkles being removed, or hair, and bustlines being filled out. Well a former editor at Cosmopolitan, Leah Hardy just dropped a truth bomb. She penned an expose on how often the practice of photoshop is often used to hide a dirty little secret, the fact that often the models are too thin and don’t look healthy. That’s right, there seems to be a regular practice of erasing the evidence of starvation in these young blessed beauties by smoothing jutting ribs and filling out cheekbones…who would have thunk it huh? So if you think that the model in the ad looks too thin, think about the  that she might have had help looking that …full….

I think the greatest irony is that we are in this Goldilocks tussle between being too big or too small when we could just concentrate on health and make that a focus and the shape of the body would just be a by-product in look…What is oalso odd is that Jane Druker, the editor of the ironically titleed Healthy magazine admits to having to reverse retouch photos for the rag—my question then is why hire models that are so thin you have to fill them out in editing? why not hire the girl who actually looks and might be healthy. She admits toadmitted retouching a cover girl who looked ‘really thin and unwell’
Robin Derrick, creative director of Vogue, has admitted: ‘I spent the first ten years of my career making girls look thinner -and the last ten making them look larger.’
It’s kinda twisted and sick huh? here is the opening to Leah Hardy’s expose, and a link to the full article as well….

Most of us are sensible enough to know that the photographs of models and celebrities in glossy magazines aren’t all they seem.

Stars such as Mariah Carey, Britney Spears and Demi Moore have benefited from this kind of technical tampering. 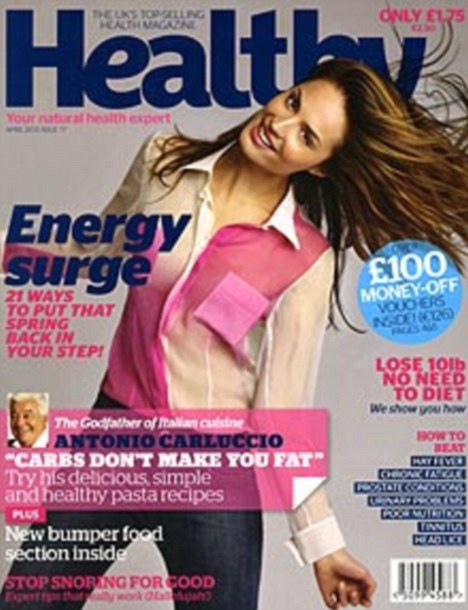 Kate Winslet – who shed a couple of stones this way in a shoot for a men’s magazine after her normally curvy body was digitally ‘stretched’ – complained that the practise was bad for women, who could never live up to this kind of fake perfection.

But there’s another type of digital dishonesty that’s rife in the beauty industry, and it’s one that you may well never have heard of and may even struggle to believe, but which can be just as poisonous an influence on women.

It’s been dubbed ‘reverse retouching’ and involves using models who are cadaverously thin and then adding fake curves so they look bigger and healthier.

This deranged but increasingly common process recently hit the headlines when Jane Druker, the editor of Healthy magazine – which is sold in health food stores – admitted retouching a cover girl who pitched up at a shoot looking ‘really thin and unwell’.

It sounds crazy, but the truth is Druker is not alone. The editor of the top-selling health and fitness magazine in the U.S., Self, has admitted: ‘We retouch to make the models look bigger and healthier.’

And the editor of British Vogue, Alexandra Shulman, has quietly confessed to being appalled by some of the models on shoots for her own magazine, saying: ‘I have found myself saying to the photographers, “Can you not make them look too thin?”‘ 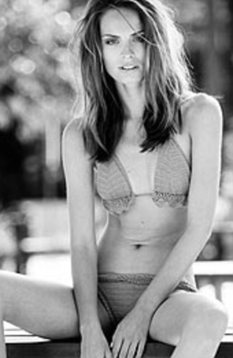 Robin Derrick, creative director of Vogue, has admitted: ‘I spent the first ten years of my career making girls look thinner -and the last ten making them look larger.’

Recently, I chatted to Johnnie Boden, founder of the hugely successful clothing brand.

He bemoaned the fact that it was nigh on impossible to find suitable models for his catalogues, which are predominantly aimed at thirty-something mothers.

‘I hate featuring very skinny models,’ he told me. ‘We try to book models who are a healthy size, but we constantly find that when they come to the shoot a few weeks later, they have lost too much weight. It’s a real problem.’

I don’t know if Boden has been forced to resort to reverse retouching, but I have a confession to make.

I, too, have been part of the reverse retouching trend. When editing Cosmopolitan magazine, I also faced the dilemma of what to do with models who were, frankly, frighteningly thin.

There are people out there who think the solution is simple: if a seriously underweight model turns up for a shoot, she should be sent home. But it isn’t always that easy.

A fashion editor will often choose a model for a shoot that’s happening weeks, or even months, later. In the meantime, a hot photographer will have flown in from New York, schedules will be juggled to put him together with a make-up artist, hairdresser, fashion stylist and various assistants, and a hugely expensive location will have been booked.

And a selection of tiny, designer sample dresses will be available for one day only. JUMP!!!