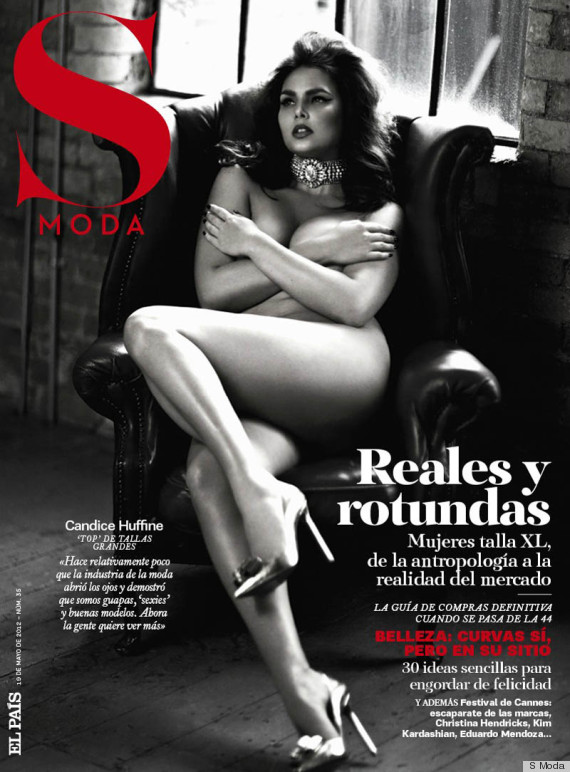 I love this cover! It reminds me of those  juicy sexy curvy women of the ’50’s/60’s like Marilyn Monroe, or Sophia Loren delish! Apropos photographer Damon Baker’s concept was entitled “Una mujer real,” or “A Real Woman”  inspired by the 1050’s pin up girls.

If you recall Candice was one third of the full figured triad on the cover of Vogue Italia.

For all the talk about including “real women” in fashion spreads, it seems like plus-size models only pop up on special occasions, like Vogue Italia‘s all-plus size issue or a controversial nude photospread juxtaposing a fat body with a skinny one.

So, after a few months of quiet on the plus-size front, S Moda has put the spotlight back on bigger models and the never-ending body conversation. Candice Huffine, famous for being one-third of Vogue Italia‘s memorable plus-size cover shoot, poses for photographer Damon Baker for a cover story entitled “Una mujer real,” or “A Real Woman.”

Her editorial, filled with Fifties-themed pinup shots, is accompanied by a surprisingly in-depth article that looks to psychology, anthropology, literature and pop culture to explain why the classic womanly shape, praised for centuries, has been replaced by a skinnier ideal.