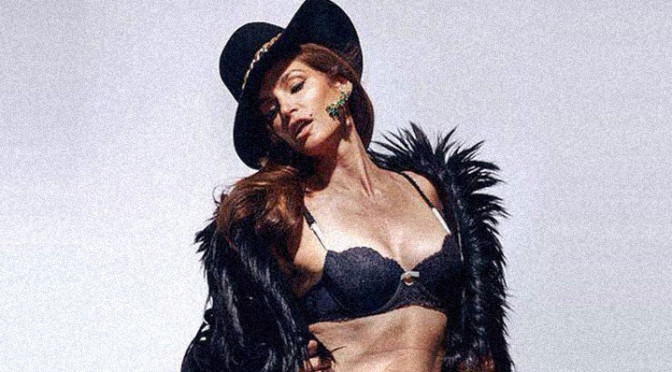 So Cindy Crawford’s un-photoshop Picture “leaked” onto the Web the other day and without doctoring she looks like a 48 year old mother of two who keeps herself in shape. Is this shocking? Perhaps just the idea that all physical evidence of the natural results of child birth have not been smoothed away with technology is in today’s world is shocking.

I find it refreshing, I just hope she does….

I hope this was not a shaming action by whomever leaked the photo, because in all t’ruth , any 48 (hell 38) year old mother of 2 would have not problem looking like this. The photo is speculated to have come from a photo shoot the Supermodel did for Mexican Marie Claire back in 2013, some speculate that the leak was purposeful, orchestrated to promote Crawford’s documentary, “Hospital in the Sky,” about body image and confidence.

Crawford spoke to Marie Claire at the movie’s premiere:

“I really think — at any age — it’s learning to be comfortable in your own skin. …If women would treat themselves with the same kind of love they give to their friends, that would be such a great gift we could give ourselves. …What makes you the most attractive is self-confidence. That’s what people see.“

British News anchor Charlene White who tweeted an un-retouched photo of Cindy Crawford says, “it is real, it is honest, and it is gorgeous.”

White says that motivation for sharing the photo was to celebrate true beauty, telling CNN:

“Women come in all sorts of different shapes and sizes, I think it’s important to see all sorts of body shapes on our screens and in our magazines so that people have a true reflection of what people look like.”

I couldn’t agree more, and that seems to the the overall public sentiment regarding the picture, so my real question is: IF that is truly the case then why aren’t we seeing more natural photos in magazines? Or on billboards? If we as consumers are craving a little reality in our intake, IF it were available to us,  would we support (when I say support I mean buy) those magazines or brands, or would we pinch our faces and say how shitty the model looked, and point out dark circles under eyes, pooches in bellies or smile lines? Is seeing our own flaws in advertising TOO much for us? After all how many of us filter our own photos for Instagram? Are we now so programmed to see technology manufactured perfection that we have an aversion to our own humanity?

Marie Claire put an unretouched Jessica Simpson on its cover in April 2010,

She looks great. However if EVERY cover looked like this would we be inclined to buy?

I think that we as consumers like the fantasy, we need it crave it…we secretly like to be made to feel that we are slightly inadequate, that the models in the ads ARE indeed better then us, likewise we get a perverse thrill out of seeing those idols stripped of everything that makes them shiny and desirable. This is precisely why those Sans Fard (without make-up) shots of celebrities looking painfully common, or haggard are so popular. Yes the industry is the problem, but we support the perpetuation. It’s a sad but true reality one that makes billions annually….

Get of the habitrail