A few weeks ago I stumbled upon this interesting video of a group of Nuns discussing what their uniforms mean to them and how they make them feel. I found it so interesting. I have always found Nuns to be so very mysterious and interesting, with there dark dresses, habits, and that ubiquitous cross dangling around their necks.

To me they always looked so otherworldly (now I unlike my brothers and sisters did not go to Catholic school, I am sure their ideas about Nuns are quite different). I think the fact that their uniform represents a job, or profession but a way of life, a belief, and most profoundly a commitment to God is what is so intriguing. The fact that it is such a visible sign makes it in a way courageous and valiant. That couples with the fact that by wearing it I know you are not having sex… (To me I always go there, sorry) I know I am romanticizing what it really must be, but I think that when we see people like Nuns, or Tibetan Monks in the their brown and saffron robes, it has that effect. 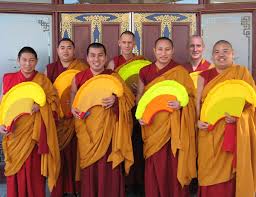 It got me thinking about the “uniforms” that we wear in life, and the how they make us feel to wear them, and the perceptions that others have of us in them. As a New Yorker, rush hour is a mish mosh of people in their (let’s call them) “Life Uniforms” from the students’ (private, Catholic and even public school) dress code, to hospital workers, security guards, postal, Fed Ex, or UPS men and women. There are the various less official uniform uniforms in the various types of business and office dress. The office attire of the the lawyer, broker, real estate agent, and banker differ from that of the bank teller, or office manager, not just in the quality and cut of the suit, skirt, jacket and accessories but in the styling. There is so much that our clothing and comportment tell about us all without saying a word. Our personal style and choices of adornment are identifiers whether we are aware of it our not. It tells if we go with the crowd, or prefer to be more of an individual, sometimes it shows that “Who we are” is not necessarily connected to “What we wear” and that, in and of it self can say a great deal.

“We are born naked the rest is drag”

I have to agree. Now in all fairness rush hour is not the best time of day to judge who people are from what they are wearing, as most people work in places where there is a dress code of sorts, hence what they are wearing is not necessarily indicative of their personal style. However there are other times when you can discern the personal uniforms of people. There is the cool teen drag (a la Gossip girl) the Emo teen, the Pseudo fashionistas (the woman that works hard to be on trend on a budget) the true fashionistas (often not on the subway) the model (skinny jeans, either a slouchy sweater or a flannel shirt, ankle boots rocker style, maybe folded down, a short jacket, and maybe a funky hat hippy hair or messy bun, and a cool leather messenger or hobo bag, with a her book) there is always the Japanese hipster who always makes you wonder, “Where the hell did she get that?”. There are the urban brown girls and boys (either African American or Latina- both in North Face jackets, Tims, boys in slouchy over-sized jeans and sweatshirts, the girls in skinny jeans that are a bit too tight, with a shirt that is a bit too small, and the nails are done and for the black girls there is always a wig or weave that is slightly in need of attention, the Latina girls tend to feature the wet look curls or the super slick side weep, or ponytail). There are the workout people, in LuluLemon and sneakers, there are the Upper west side moms with strollers and snacks in baggies, the Dad’s with their sons who are dressed as their mini me’s, there are the college students with a hodgepodge of styles that don’t really match but that is the “look” they have a backpack loaded with books. There are musicians with instruments in various sized case, and nondescript professionals that are in a more artistic or liberal field exhibited by either a funky haircut or unconventional style of dressing. It’s all drag….

There is one thing that I have discovered that is a part of almost everyone’s uniform these days and that is headphones and either a phone, Ipad, or gaming system…

I take Bikram yoga, and in the dialogue Bikram refers what you are wearing for class as “your costume”. When I first heard it I thought that is was funny. Since Bikram is Indian I thought that it was an issue of meaning skewed in translation, and perhaps it was but; I find it ironically truthful. The things we wear are in fact a type of costume. We dress in a manner that we think represents who we are and what we are about, or in a manner that seeks to create a certain perception from the onlooker. We clothe ourselves to identify with a clan or tribe and separate us form others. To dress modestly, or provocatively, on trend, or to pay not mind, these in ways are statements to who we are and how we feel about ourselves, and aspects of our society.

Often our actual bodies (not just what we shroud them in) are also a statement, not just on who we are, but how we feel, and participate in our lives. Often how we care for our bodies, what we not only put on them, but also in them, say a great deal. The first thing that comes to mind is the idea of what we eat and if we exercise. I know that I instantly have a feeling about someone carrying a yoga mat, or in workout clothes with a bottle of water, or people dressed fro going for a run. However the way our bodies respond to food and exercise don’t always have a uniform result or a uniform look. I mean we think we know what health looks like (thin, fit etc.) but that is not always the case. I think things like hairstyles, piercings and tattoos are more exemplary of a chosen image of our bodies representing us. Using one’s skin to tell stories, create memorials, express beliefs, or convictions is also in a way type of Tribism. There is a very specific and extensive community linked to both tattooing and piercing. Oddly when it comes to more cosmetic forms of body augmentation such as breast, butt, or facial implants there is less of a communal feeling. I have seldom seen women with implants (of any kind) enthusiastically and openly discuss their procedures the way that people with tattoos do! It is taboo to say to a woman, “Wow, do you get Botox? I get it too… I love your Restylane job!” I’m sure it happens in a certain context, perhaps more on the down low, probably something like the Masons… However plastic surgery has also become a uniform of sorts. The puffy lipped, bulbous cheek implants, breast and buttocks implants and Botoxed foreheads have become a certain status symbol. The faker you look the richer you look. The “look” implies upkeep, expensive up keep. In some affluent communities the waxy, plumped up plastic non-moving facial features along with the Louboutin red-soled shoes are identifiers that you are a part of the “Haves”. All uniforms. Looking too natural is frowned upon (well not actually because they can’t move their faces!)

Personally my uniform has me ever ready for a funeral or a robbery, I generally were all black, love a boot and I am seldom seen without my weekender Coach Tote (the best most versatile bag ever!) and sunglasses. For me I feel I can always look put together, black always looks chic, and is quite indistinct at the same time. You can wear pieces multiple times and no one ever knows (I can’t tell how many times I have been asked if something in my wardrobe is new!) It goes from day to evening with out thought, and is slimming! And when I am out of “uniform” it’s surprising to most people, it’s like a little holiday. It’s my Science!

What does your uniform say about you?

One thought on “What do your Clothes say about You? Nun’s Speak about their Uniforms”