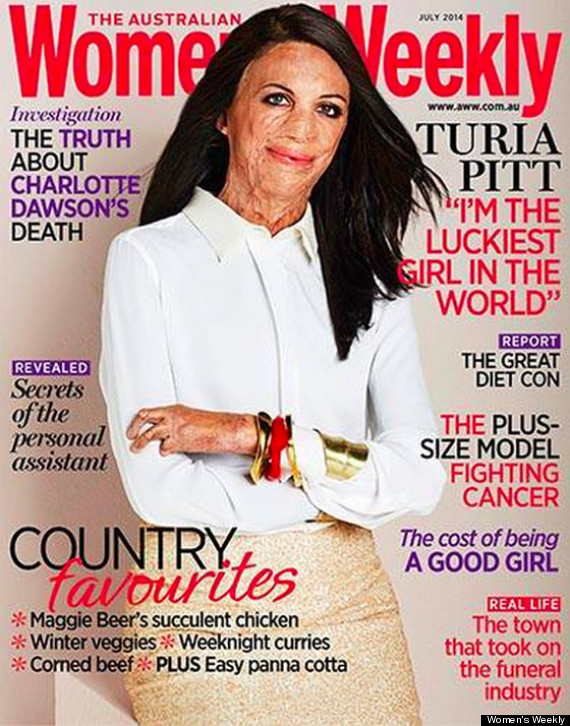 26 year olf Turia Pitt is a lot of things, a burn survivor is merely one of them, although it was probably the thing the most effected her life to date by altering the very course of her life. Ironically she was running an ultra marathon course in Australia when she was caught in a brush fire and severely burned over 65 percent of her body. Her strength of both mind and body were already evidenced by her taking on the challenge of the 100km race in WA’s Kimberley region in September 2011, but were truly tested when she had to endure over 100 surgeries and spent more than 864 days in the hospital fighting for her life.  She won that race and has been honored as the July  cover woman for Women’s Weekly magazine.

Today, the mining engineer is a motivational speaker and author. She is also a member of Women’s Weekly judging panel for the annual Women of the Future scholarship awards. After Pitt was photographed as part of the panel, Women’s Weekly editor decided to put her on the cover.

“When Turia was photographed as part of our Women of the Future judging panel among a group of similarly impressive Australian women, it was clear from the moment she sat in front of the camera that the July cover had to belong to her,” Editor-in-Chief Helen McCabe said, according to Australia’s Women’s Weekly. “Any attempt to describe the magic and beauty of Turia seems to get lost in platitudes or clichés. Yet I have never met a more remarkable person.”

Pitts says of the honor:

“Being on the cover of the Australian Women’s Weekly is a huge honor. I feel very humbled. For me, it sends the message that confidence equals beauty. There are a lot of women out there who are so beautiful but don’t have the confidence, and that’s what gets you over the line.”

I think this is great and  we should be seeing more of this. Not just women who are survivors of physical trauma, but women who are strong, and successful but may not look like your average cover models (I like the irony of the statement…) This is what we as the readers should expect, after all the magazine is WOMEN’S Weekly not “Beautiful Women’s Weekly” not “Thin Women’s Weekly”, it is a magazine that seeks to represent or speak to Women- all sizes, shapes, colors, religions, and social strata…This cover- or having a “full figure’ woman on the are things that as readers we should not only expect but demand, as equal representation of our gender… Let’s hope that this shows them that we desire more of this, which means that this issue must sell—out sell the others in order for them to do it again, and make it a mission!!!