Demi Moore’s Daughter Tallulah (18) told Stylelist Blogger Network members Elisa Goodkind and Lily Mandelbaum of StyleLikeU that her mother that her mother was highly supportive of her in terms of her body, and her feelings about it (:39). She says:

“[My mom] was very much like ‘Love your body, love yourself, run around naked….’ Whatever we wanted to do, it was very accepting.”

I think that is lovely and very maternal, it’s what every mother should say right? But I wonder how much those words mean when your mother is constantly altering her body in a fruitless pursuit of perfection and youth? Although I don’t have children I know that they are acutely aware of contradictions – the whole “Do as I say and not as I do” has never sat well or worked on anybody. I am sure that Demi really wanted her daughter to have a positive body image and not be plagued with the insecurities that had her seek treatment. I am sure that she told each of them that they were beautiful and perfect as they are but I am also sure that her daughters were there when she was contemplating her next procedure, they were there when she came home after, and they were there for the healing. Seeing that has to have some affect.

This is not an attack on Demi, clearly she has her demons that her whole family had to live with, I am making a comment about how “Hollywood” This report is, the idea that even though we all know about her mother’s body issues, and her public struggle (evidenced by the fact that thankfully, she sought treatment) Tallulah seems to gloss over the elephant in the room. She talks about the skinny minnie L.A. Stereotype (3:20), ( she grew up with that in her household) puberty and wanting to develop and look like a woman like her mother and sisters (3:50). AND what’s CRAZY is the fact that later she goes on to talk about how many of her “friends” have eating disorders (4:37)… her friends? Just her Friends…What about her mother? Either this is Hollywood Spin or denial. (Maybe this was shot before her mother went public)

Here’s the thing, I think Tallulah sounds very grounded, clear and has a healthy perspective on life and her body. Later she says:

“It’s almost weird if you’re like ‘I love my body” everyone’s like ‘you’re conceited.’ It’s like you have to be insecure and hate yourself to be the norm. Just have fun, smile and laugh…that’s the best thing in the world.”

I hope that her security is authentic and not manufactured for the cameras, we all recall Demi’s Harper’s Bazaar interview where she said she was in a better place and then a few weeks later she was in treatment… 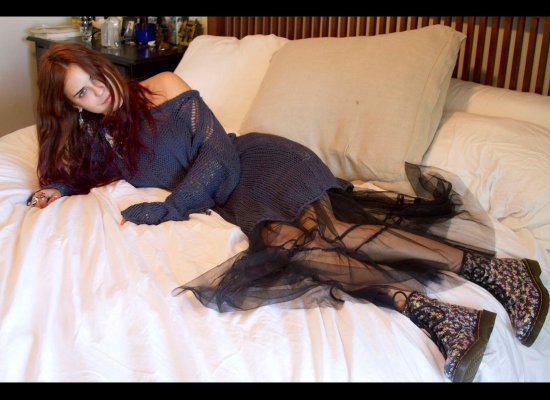