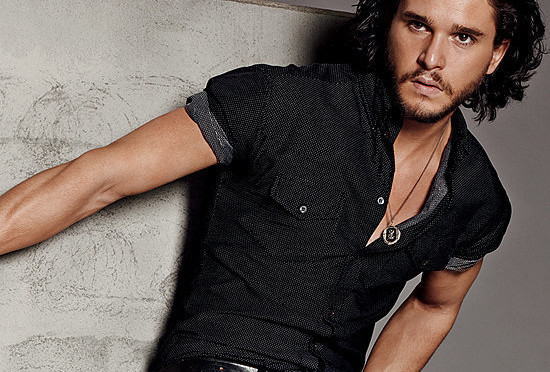 Game of Thornes’ Kit Harington let it be known that the label “Hunk” is not desirable to him. He finds it demeaning.  Here is what he had to say to News.com.au (via Page Six):

“To always be put on a pedestal as a hunk is slightly demeaning. It really is and it’s in the same way as it is for women. When an actor is seen only for her physical beauty it can be quite offensive. Well, it’s not just men that can be inappropriate sexually; women can be as well.

I’m in a successful TV show in a kind of leading man way and it can sometimes feel like your art is being put to one side for your sex appeal. And I don’t like that. In this position you get asked a lot, ‘Do you like being a heart-throb? Do you like being a hunk?’ Well, my answer is, ‘That’s not what I got into it for.’”

This brings light to the reality that double standards, tend to lean to one side, however the blade cuts both ways. When women are labeled a “Bombshell” or “Sex symbol” and most recently “MILF” we can certainly understand it as a reduction. We understand that she might feel a great portion of her being has been overlooked and negated, and we stand fist raised in solidarity to fight for her right to be acknowledged as a complete, thinking human being (albeit bent over in booty shorts, looking over her shoulder, with her finger in her mouth on the cover of a fashion magazine.. but I digress). Why is it that men who are branded with the male equivalent of these labels don’t have a force of opposition behind them. It’s just as sexist to call a man a “hunk”, and say that he’s probably “As dumb as a bag of bricks, but I wouldn’t kick him out of bed” . Hey dudes have feelings too, they are just not sinewy lunks of meat there for our visual pleasure (ok then there is Magic Mike, the Ugly Coyote for women)…

There are reasons why actors like Brad Pitt and Johnny Depp crafted their careers they way they have. These were “pretty boy” “hunks” who saw early on careers of being typecast in those limited roles, unless they took

themselves out of the stud lane.  Whether it was Depp’s entering Tim Burton’s wacky world, or Brad Pitt mixing it up  playing a psycho killer in Kaliforna , the gritty detective in Seven or beating the crap out of people in Fight Club, both pulchritudinous actors stayed away from roles that had them shirtless, and mindless.Though blessed with leading man looks they took “character” roles (as leading men) and earned the respect of the acting community.

Pitts other half, Angelina Jolie…Pitt took a similar route, but it is Farrah Fawcett tho comes to mind when I think of beautiful women who repudiated their sex symbol labels. The thick maned Charlie’s Angels actress who’s nipples skyrocketed her to a level of fame that was unparallelled at the time actively worked against type later in her career.  Though Fawcett was one of the most desired women in the world she desperately wanted to be recognized as a “serious” actress. She ditched the lip gloss and got “ugly” taking to Broadway in the play Extremities (where she held a man captive in a fireplace) and then starred in the legendary television movie The Burning Bed. The television special not only solidified Fawcett’s dramatic talent but shed light on the shrouded world of the women who suffer under domestic violence. There are others who have  been able to rewrite the wording on the labels they have been tagged with early in their careers either through acting, or business…Think Jessica Simpson, the buxom blonde singer went from not knowing if tuna was chicken to creating a multi-million dollar fashion empire, how’s that for a dingbat?

The reality is, that though some actors and personalities may balk at being considered “hotties” or hucks” or “MILFS”  ( and they have every right to)  in truth those labels are is their tickets to the dance. Where it may be demeaning, and limiting even  tiresome, they cash in on it, and rightfully so. You have to get  in where you fit in! The more poignant question is: How long do you continue to cash those checks?