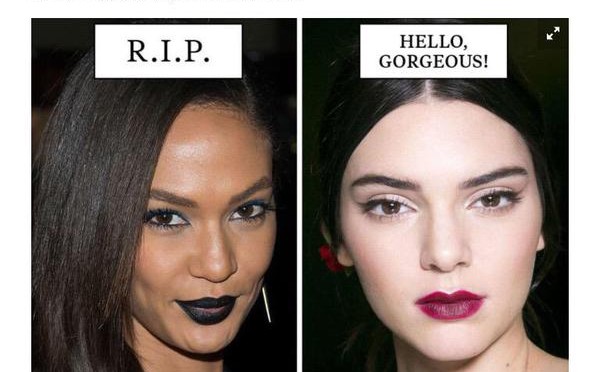 This weekend there was a slight dust up about Cosmopolitan magazine’s “Beauty Trends That Need To Die” list. Out of 21 beauty trends featured, about a fifth of the old “RIP” beauty trends feature models and celebrities of color. The “gorgeous” models all look very similar–White…. People saw this as a subtly racist message, the woman of color representing the “out trend” had a “RIP”  on the forehead, the on trend face of the white model said “Hello Gorgeous”. Perhaps it had more to do with the lack of diversity on the “Hello Gorgeous” list. Some find it so distasteful that there has been talk of boycotting the magazine that has not featured a Black woman in its cover since 2011.

Then there is the Kylie Jenner “Black Face” fashion pics that went up this weekend. Some were clearly outraged, others didn’t see the “Black” of the face. Granted, the images resemble more of a darkened sparkling alien then the traditional “Al Jolson” Swanee River, minstrel Black Face,but I would say it would fall under the realm of Black Face “light”, a new millennium Black Face if you will. As a perused the comment sections of various blogs trying to decided if I wanted in on these hot button stories, I noticed that the on trend response was, “What’s the big deal?”,  “Why are you always pulling the race card?”. Right before I got offended, I sat back and thought, if I step out of myself, my Black, female self, if I eradicate my point of entry I can see where these two instances, and the Zendaya /Guliania Rancic dreadlock comment, and Italian designer Claudio Cutugno sending models down the runway in Black Face this fall during Milan’s fashion week might seem like “No big deal”, perhaps I could be like Taylor Swift in some high waisted shorts and a pair of Keds and shake it off, but I am not, and I cannot.

I am a woman of color, a Black woman and I live in a society a culture where systematically my image, my likeness has been striped down to nothing. My body has been grotesquely sexualized, demonized and bastardized, it has been beaten, abused, raped, murdered and left for dead both figuratively and literally. It is My body, that nursed, cared for, raised and nurtured my suppressor and his children, as well as my own kin. My Image ,though shamed and shunned has been appropriated and commercialized, made money for all but me while I have been forced to live in the narrow shadow of my true self,existing only a sliver enough for the Mamie, Jezebel, Neck swiveling, finger wagging eye-popping, booty clapping version of my image to survive, thrive. I am force feed the high fructose, fatty images of what they have created as my image until it seeps from my pores and bleeds salty from my eyes…until when I look in the mirror I do not, can not see, nor recognize what or who I am…

So when I see things like the Cosmopolitan beauty trends list, or Kylie Jenner (the seventeen year old who comes from a family who career dates men of color, and are lauded black girl asses, Jenner who is rumored to be dating a 25 year old Black rap producer, who’s child’s mother is a Black stripper with the body of a modern day hottentot, who goes back and forth through social media about this man…)

who presents images of herself looking “colored” and captions it with “I wish I looked like this all the time” I, as they say down south “Catch feelings” about that. When your face, and your body are all but systematically negated from the cannon of beauty, and when the physical characteristic traits of your race (lips, our behinds, our complexion even our hair) are ghettoized fodder for mocker when in your possession, but regaled when grafted onto the fairest of them all…. When we see Lips and hatches show up on Goldilocks, we tend to get a little sensitive, it feels like we are strange fruit with bits of our bodies being plucked off.  A gruesome picture huh? Well imagine what it feels like to be us watching it happen. Watching as your body, your vocal cadence and verbiage, your hair styles and what we call “swagger” gets bootlegged and though they are the things that you are told to eradicate in your being so that you can get ahead, those very things can make the fair a superstar, a fashion icon, it can make them beautiful, edgy..It just makes us ghetto. The things that we organically create have not value until they are co-oped and taken out of our ownership such that when we try to sing like we do, we, the original is…to ordinary but Blue Eyed soul…now you’re on your way. When faced with this double standard of beauty I tend to feel a pain and a rage and a sickening feeling so deep that connects with the emotional DNA that arrived here in the hull of a slave ship.

I know it seems far more emotional, and sensitive then these previously cited instances should evoke, but THAT IS WHAT I AM TRYING TO CONVEY…things like this land in this very tender place for a great deal of Black women AND men. It is the constant disrespect, negation, bastardization, sexualization, ghettoization, dehumanization of our bodies, our images of our selves that wears us down…. And when we do speak up (albeit in a very eloquent and educated manner), and make noise, and say no more,* then we are being sensitive, paranoid,” imagining” it, we did not imagine the video of The University of Oklahoma Sigma Alpha Epsilon Frat boys singing a no doubt long sung racist chant, that was real. Nor do we imagine unarmed dead men in the street…

We get tired of having to be better than those who hate and are hateful or exhibit bigotry towards us, but if we rise up we are “Angry Black Women/Men” we can’t win for losing. When we demand respect, people feel threatened enough to “stand their ground” so we can’t even fully have our rightful anger for fear of resembling the “boogie man” that society has made us. And I will say that we as Black people have played into it we have contributed to the perpetuation and the reality of the situation. Yes we do drink, drug, rob, cheat, kill, fight, cuss and more (just like everybody) else but the cards have definitely been marked and stacked against in many ways, albeit that is not my point. I just wanted to have my say about why We as Black people, and I will open it up to “people of color in America”, (because there is a sliding scale of prejudice and bigotry) feel a certain way when these types of things happen.

This is what LEAD SCIENTIST have to say about :What makes us beautifully scientifically….