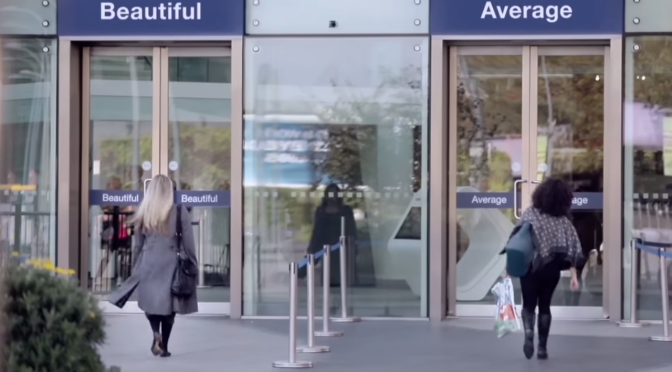 Well they have done it again! Dove has created a context that  reveals the depth of the Body/Beauty image issues that plague women. Dove is a company that has launched a full on assault on marketing  that feeds on, and creates the feelings of inadequacy that women harbor throughout our lives. Dove was one of the first companies to realize and address the damage that the beauty (and fashion) industry inflicts on their consumers in order to make a buck. Their success has prompted other companies like Aerie to follow suit, ditching photoshopping and telling women to “Love their real selfie”.

The Real Beauty campaign has always been well thought out and well crafted, beautifully shot, and always tugs at your heart strings. Honestly I can’t get through one clip without crying. There are several reasons I get emotional, the first is because of the subject, how can a women, any woman, (or man for that matter) not be moved by a human being’s deepest vulnerabilities, the bravery it takes to publicly express them, and then see them sublimated and transformed? It’s a tear jerker for sure. But I always have the Chicken or the Egg dilemma, am brought to emotion because I relate, or because it is crafted in such a way that it psychologically pulls me their, kind of like how Disney kills a poor creature off then there is some sort of redemption…I can never tell, THAT is the art of good marketing you don’t know where your thoughts or emotions start and their campaign begins…

There are some who are questioning the campaign, well not it it’s sentiment but let’s say  it’s limitations. The idea that though Dove is asking, and challenging women to confront their perception of themselves, and their images, (all good) HOWEVER, there those who see the scope of “beauty” being defined solely in the physical manifestation as being too limited and ultimately sexist. The reason? Because the idea that being “beautiful” is still one of the most important things to women because the world has given it the highest value for a woman. Beauty has cache, it opens doors, creates greater possibilities for women, even more then being brilliant. the idea that a women can earn more on a stripper pole than she can with a PhD is a reality, one that men are not beholden to. The value of a man is not measure by the smoothness of his skin, the firmness or roundness of his buttocks, or the fullness of his lips or breast. It is not even measured by the hardness of his abs or the size of his penis but by his accomplishment and what and how he contributes to the world.

Susan Chumsky‘s commentary on Fortune speaks to this point:

Kat Gordon, founder of the 3% Conference, which advocates more female leadership in advertising, called the “Choose Beautiful” campaign, released last week, “heavy-handed and manipulative,” while Jean Kilborne, the filmmaker behind Killing Us Softly: Advertising’s Image of Women, termed it “very patronizing.” Dove, The Guardian says, “has mastered the art of passing off somewhat passive-aggressive and patronising advertising as super-empowering, ultra PR-able social commentary.”

The article goes on:

Put aside the cinematics and girl-power uplift, and there are questions: What exactly made the women switch doors? Might it feel a bit immodest to tell the world, “I think I’m beautiful”? Why only beautiful or average—how about fetching or charming or magnetic? How is a beauty bar or body wash empowering? And what about men? Don’t they get a door?

Over on Buzzfeed  an article by staffer Arabelle Sicardi was momentarily taken down then reposted (The site posted, then removed, and then reposted a piece about the campaign though not, the editor says, because Dove or other Unilever brands have advertised on his site.)

Sicardi made the salient point:

What do you think?