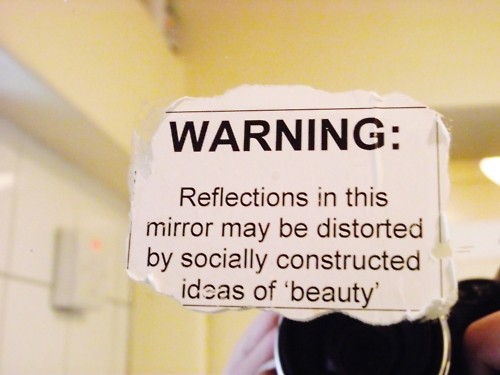 Mirrors are tricky things. When you look into them they don’t always show you what you want to see, like when the Witch in Snow White asked that fateful question “Who’s the fairest of them all?” she got her feelings hurt. In real life these inanimate reflective surfaces hold so much power, and sway that we literally become slaves to them, and when they do not show us what we want to see horrible things can happen. Things much worse then poisoned apples, living with a few dwarfs or sleeping in a glass coffin for a while. A bad turn in front of one can result in debasing words, to surgical augmentation, to starving ourselves in order to get the right “answer” from our mirrors. Most of us don’t have fun house mirrors in our homes, although you have to admit that those dressing room mirrors come close. But Seriously if a mirror starts talking back to you perhaps you’ve been watching to much Harry Potter and should get out more!   The truth is that it’s not the mirrors that are distorted it’s what we hold in our heads. We are the voice in the mirror, but where does our voice get its information? The messages of beauty are inescapable, from the moment you wake up, sit in front of the computer, turn on the television (that’s even  before you step out of your home) we are in undated with images, and suggestions as to what “beautiful” is and directed towards the products and tools to help us become that because—clearly we all aspire to be that vision of beautiful….

Due to my training and career as a professional dancer there has scarcely been a day in my life since I was 3 years old that I have not been in front a mirror for at least an hour a day. Those inescapable reflective surfaces have been a necessary tool to aid the mastery of my ballet technique, I looked to the mirror to ensure that my leg was behind me in Arabesque, or that my arms were perfectly curved and sloping gently downward from shoulder to finger tips. Mirrors have helped my check my spacing between dancers and they have even helped me cheat when I didn’t know the combination. I have seen myself execute beautiful developpès, petite allegros, and grande waltz combinations across the floor. There were times when it confirmed that I indeed had what it took to be a dancer, that the lines I had worked so diligently to achieve had been arrived at and that I did possess a bit more then mere potential. Conversely those very same mirrors also reflected how I was inadequate in almost every way. Starting with the chestnut hue of my skin,which in no way matched my ballet pink tights and slippers. (It wasn’t until I trained with Dance Theatre of Harlem for a summer session that I was introduced to the brown tights and matching slippers that all of the sudden made be feel like I belonged at a ballet barre.) Then there was the image of my non-bun. For the longest time the two fuzzy ponytails that I pinned criss-crossed behind my head stood as reminder that I was not like the others. As my ballet classes were always at the end of the day, my once smoothed hairline or “edges” as they are know to Black folks were always sweated out and created a fine kinky halo around my face, wrong again. There was nothing more that I wanted then to look smooth and polished like my classmates. Then there was the roundness of my backside, that had many a teacher tell me to put my “po po” in.

As I matured as a dancer I learned to avoid the mirrors, an epic but achievable feat in a dance studio. I would chose a barre that was out of range of the mirror, in center I would opt for the back line, being taller than most of the females in class (another issue the mirror pointed out) my strategic placement just looked like courtesy. When confronted with my image in class I learned to look past myself as not to see. Though a sophisticated technique of avoidance, it did teach me how to create depth and distance in a small space, quite useful in studio showing and when I finally got on stage. However it did not help me get past those often debilitating feelings of inadequacy and being nothing at all what I most wanted to be.

Outside of the studio my passive aggressive relationship with mirrors continued as an extension of what I experienced in the dance world. Having spent so much time trying to be a sylph, (white and lithe) that I had unwittingly adopted a very Eurocentric concept of beauty. Of course I had help, everywhere I turned there was an array of beautiful white women selling me (and everyone else) something, clothing, make-up, cars  a life style you name it. My favorite models at the time were plastered all over my walls. There was a raven haired, full-mouthed model that longed to look like. As it turns out it was Janice Dickenson.

I can remember finding the first photo of Beverly Johnson

, angels sang, and then came Iman.

Thank goodness for Essence Magazine! I began to scour magazines trying to find photos of the two to place on my wall. Almost subconsciously I place these women of color over my bed and slowly Janice was exiled to the far wall, I still adored her but there was no way I was ever going

to be able to look like her. By pushing her away and keeping my brown icons near, I was willing myself to keep my dreams, my desires realistic.

But when I looked in the mirror there was still a problem. Where I certainly didn’t look like Janice Dickenson, I didn’t look like Beverly Johnson or Iman either. Both had “classic” beauty but shaded brown. Though they were images that seemed in some way closer to me, or achievable in a sense, they were just as unobtainable as the Janice Dickenson image just in a darker shade. It just was not me; and would never be. This reality reflected was more painful then the image of myself as a dancer. When you don’t see people like yourself somewhere, subconsciously it says that you are not supposed to be there. Since I had never really seen a black ballerina, it said to me that in a sense I was not supposed to be there, or want that for myself. The fact that I danced was an anomaly not a natural occurrence. That feeling was compounded by the fact that in addition to taking ballet and being one of the only black students in the school, from first to sixth grade I went to Baldwin Academy for Girls in Bryn Mawr Pennsylvania where for 3 years I was the only black student from K-9th grade. From an early age I was very used to being the “Other” and exception, but when I look at images that were supposed to “represent” me and not see myself there it  planted another strain of inadequacy and insecurity.

It has been scientifically proven that beauty is about symmetry, but it’s also about structural alchemy in a sense. It’s about the balance of your facial features and how they blend and play off of one another. Like the face the body is about proportions and shape. For instance through the eras the preferred female body type regardless of size had a .7 hip to waist ratio. Marilyn Monroe and Audrey Hepburn both had the ratio.  When I look in the mirror the truth is that I where I do see elements of what society considers to be attractive, it is just not in the right balance to make me beautiful. I am attractive but not beautiful, those are different things. I have never seen a woman in a magazine that resembles me either facially or physically. People always tell me I look like Whoopi Goldberg, who I think she is stunning, however society does not how to “classify” her. She is not classically beautiful, she surpasses “Exotic” and though black people are familiar with her “look” may have and aunt or cousin who looks like her, the narrow perspective of beauty determined by the Eurocentric standard does not recognize it. What to do? What to do?

As I have matured I have learned to deal with some of the feelings of inadequacy that I have cultivated from the societal standard of beauty and fitting nowhere into it. I stop looking. Not at myself, but at fashion magazines, I stopped listening to what the fashion and beauty experts said on television shows. I stopped exposing myself to the things that made me feel bad about myself, that were toxic to my head and heart. I started to question the edicts that we readily conform  and subscribe to without thought. I started to shape a new more elastic idea of beauty, one that could include myself in a way that I had never been before. I started to create tools that would work to balance my head and soothe my heart, different ones for different situations tucked away in my toolbox.  2 years ago I began to practice Bikram Yoga, the “hot” yoga that insists that you look yourself in the eyes for 90 minutes. I prefer to look at my navel, I like my stomach, I take pride its flatness and the six pack in a way that I have never my face. I have never liked my face so looking into my eyes for 90 minutes is hard, not because of what I see into myself but because I don’t want to look at my face. It has gotten better. I have used my yoga time to look and see myself and find things in my face that I like, and to try not to be so critical. It’s step by step, well in yoga more like pose by pose.

So the next time you find yourself in front of a mirror and you ask that fateful question: “Mirror Mirror on the wall, who’s the fairest of them all?” just remember that you are the voice in the Mirror and if it still wants to talk trash reply “Shut your trap or down you’ll fall.”

4 thoughts on “Mirror Mirror on the Wall”