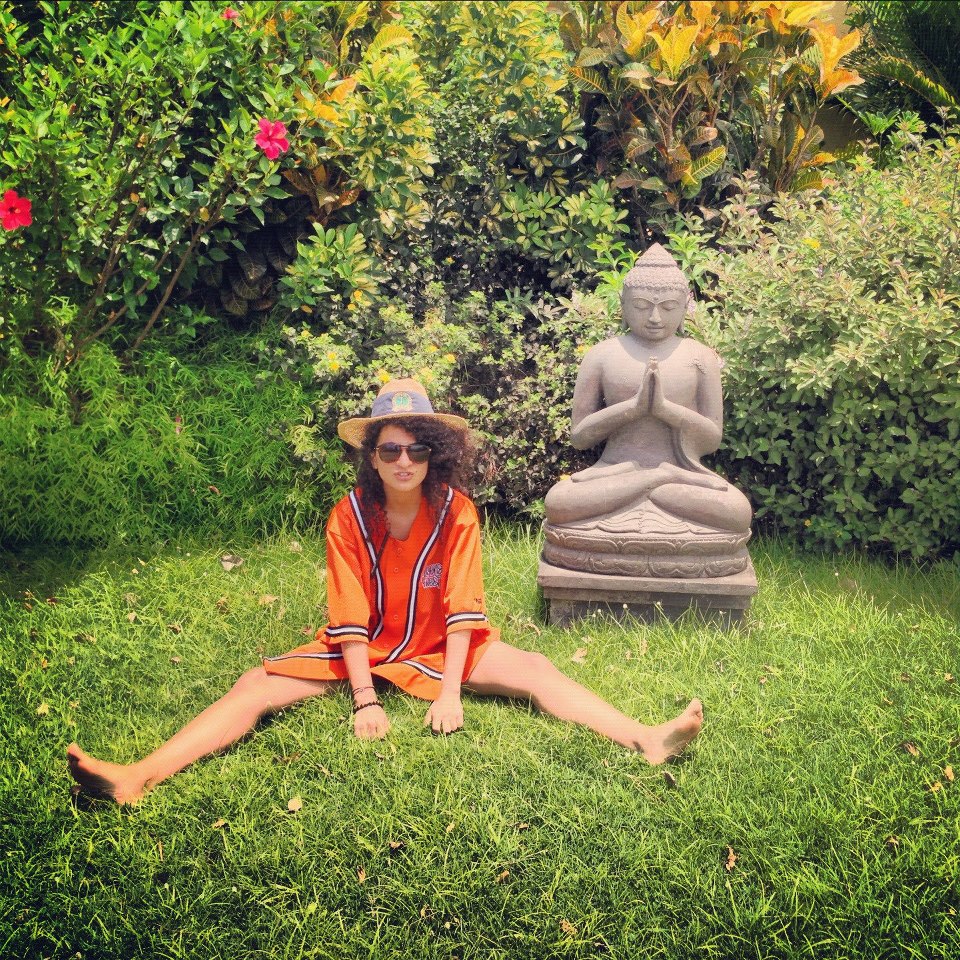 Diana Adi-Khalil is a woman who looks at the world from a different perspective. Once I went to an art exhibit with her, and entered a room that was an installation, the church like pews in side were built in the round, and the room had no ceiling. You were meant to simply look up and …experience. Everyone entered the room with a quiet reverence and took a seat on a bench, and commenced to looking at the night sky. My best friend April and I followed suit, however Diana a matter of factly laid on the floor… It had never occurred to any one to do what seemed to be the most logical thing, given the fact that the point was to look “heavenward”. As others entered the room, seeing this petite, woman with a mane of wild curls wrapped in a haphazard topknot lying on the floor, they instinctively stretched themselves out on the carpeted floor. Diana Adi-Khalil literally sees the world from a different perspective…

Perhaps it’s her eclectic background, she is of Lebanese parentage, but raised primarily in Paris, she has unpretentious, purely authentic, bohemian laisseze a faire sense of being and style that one would associate with the 1920’s or 30’s. She is an artist, is the same sense. Art is not what she does; it is who she is. She lives her live artfully; she is constantly in creation, whether it is deciding what to wear, drawing a little doodle, or taking pictures. Her speech she is colorful and animated in her descriptions of the most simple of things. (I have experienced her in her third tongue English but am told that in French she is the same). She came to New York to study at New York University and has been here for 5 years. I asked her to share some of her thoughts and her work on the subject of health, beauty and body image. And in true fashion she crafted something unlike any other. She is truly singular, and original, and has made some keen observations relative to the American culture, our relationship to food, lifestyle, and yoga…

These two words resonate in my head because they are pretty much everywhere on the streets of NYC:

I get overwhelmed… by a “good” cause

Who else sees the “good” in ingurgitating the dose of orange you are supposed to eat in a year, in a little powdered pill?

A Chewable Strawberry Vitamin C from Sunkist is “All Natural” they provide 500 mg each. What is natural about a pill that provides “833% of your daily value per tablet”?

Hmmm I am not sure it is very natural to ingest 800 % more than the doctor recommended dosage of vitamin C…in the name of “goodness”.

Is it “natural” to drink your exhaustion away in a juicy cup containing the vitamin and iron of an entire organic farm?

As a Lebanese woman I was raised on the gourmet food, I praise it, and gain satisfaction by feeding others and myself.

EAT & CRAM ‘TIL YOU BURST– In Lebanese homes. My aunt almost cries if we do not try every single dish she serves. She stuffs me with her delicious food.

As a French woman, I do* eat McDonald’s and squeeze my fries in my double cheese. Yes! Inside the burger, that is my ultimate pleasure! But that is not so French it is actually a remix of Lebanese Shawarma sandwiches:

This proves that I am a product of both cultures equally.

I smoke like a fireman till my teeth turn green, and smuggle tons of cheese,

(Although all of above is true) as we say in French, “Plaisirs Gourmands”=Gourmet Pleasures

I do not deprive myself of anything, and should surely moderate myself. Hmm

Whatever, I am a Libertine, it courses through my veins.

One thing that I have clearly gotten out of my New York experience is having a sense of my body, the FEEL of MY BODY.I have always lived through excess and ate, as I wanted, without thinking of my Health; but I now I feel that I am not immune anymore. When I eat too many bagels I feel down, (and the NYC tip to scoop them out did not help my body feel better.) I feel tired and lazy when I eat badly. My body is pulling the emergency alarm. This never happened to me in Lebanon or France I realized it is not because of way* of eating but because of the food itself.

Why that? How come I never sensed that before? There might be a reason. Maybe it’s because most of the meat in the States has hormones and steroids in it, or that all the non-organic stuff are MGO or who knows what it is that makes chicken taste the same as the beef? Or maybe because most of the people eat at their desk, or that the deli around my corner is open 24-hour and was still open during hurricane sandy, or for the 4th July, I can go on and on about the American lifestyle …Life in NYC is INSANE!

In NYC, not only I feel overwhelmed by the pressure to be “good”, but also I feel tempted to the extreme. And he who has extreme temptation has extreme reaction. So here I am reacting to the fast hormones antibiotics, bad oily products, MGO vegetables blahblahblah… I could hear this little voice telling me to run to the other extreme and eat vegan NO gluten NO meat NO fat NO oil no….

This extreme revolution, whether it is for pros or cons seems no good for me.