Babara Walters, Diane Sawyer, Katie Couric, what do they have in common, They are all powerful and history making journalist, AND they are all attractive women .

Both local and national news anchors, and weather people come into our homes daily, they surreptitiously become a part of our daily lives telling us to take an umbrella or warning us that downtown will be a mess due to a water main break. After watching, or listening to these people for years you suddenly look up and realize that, seemingly over night they have aged. The men have graying temples or have lost their hair, and the women, well the women oddly stay relatively the same, there are fluctuations in weight due to pregnancy but for the most part women in news exist in a sort of stasis. Sure there are those men who dye their hair and get a Botox and fillers but it is the woman who are “required” to “keep up appearances” .We all know why, it’s no big secret, we want, expect lovely looking women to tell us that the world is going to hell in a hand basket, after all it’s are more soothing to be told that the world is coming to an end by a petite blonde woman with an inviting smile, a sort of stewardess of the the news.

I jest, but only slightly when you here what happened to this female BBC morning show host you’ll see it’s not so far off!

This is Susanna Reid. 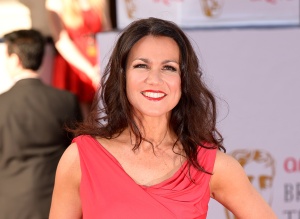 Reid is a very successful television journalist in the UK. She is so successful, in fact, that she was poached from the BBC’s very popular morning show to front a new show over at rival station ITV.

Unfortunately, the new show, “Good Morning Britain,” isn’t doing so well in the ratings. In fact, it’s getting comprehensively trounced by “BBC Breakfast,” the show Reid used to host.

Now, this is nothing new. “Good Morning Britain” is the third show in a row that ITV has tried to put up opposite “BBC Breakfast” — all without success.

So, what are ITV executives doing to prop up their sagging show? The answer, it would seem, is “microscopically analyze every aspect of Susanna Reid’s body.”

From the Daily Mirror:

An ITV source said: “Helen is putting effort into training the presenters, who aren’t focus-testing too well. Susanna has been told to nod more, look more sympathetic and engage. Even her dresses are analysed to the nth degree. Her skirt length is checked and the colours now need to be brighter and lighter. A lot of people think she’s too harsh and intense. There was a discussion about lightening her hair. Most of their big-hitting presenters have been blonde – Anthea Turner, Kate Garraway, Fiona Phillips. Holly Willoughby is held up as the perfect nodder during interviews and she’s as opposite to Susanna as you can get. It’s a serious business getting GMB and Susanna Reid back on track.”

This follows an earlier “controversy” over how much leg Reid should be showing on air.

From the way Reid’s every move is talked about, you wouldn’t know that there are actually three other people hosting “Good Morning Britain” alongside her. Reid’s primary male counterpart, Ben Shepherd, does not appear to have received the same kind of micromanagement. His nodding abilities, it would seem, are just fine.

Of course, this kind of thing is nothing new for women in television, who find their every gesture scrutinized to an unbelievable extent. Reid’s predicament is strikingly reminiscent of that of Ann Curry, who found that she could do nothing right on “Today” and was summarily forced out.

Former CNN anchor Kiran Chetry and PBS’ Judy Woodruff spoke out on Sunday’s “Reliable Sources” about the way women in television are scrutinized over their appearance. The discussion came after recent reports that executives at Britain’s ITV have criticized host Susanna Reid over her dresses, hair and nodding in an attempt to boost ratings. On Sunday, Chetry seemed to be able to relate to the story as she listed some of the feedback she’s received about her looks during her career in television. The former anchor, who previously worked in local news and for Fox News and CNN, said she has been told to: — buy a wig — not wear bare arms — not wear taupe — dye her hair blond — wear shorter skirts — wear longer skirts — get Botox

SEE the Video on CNN

Here is what we have to remember, in spite of it all We, as Women Strive, Survive and Thrive