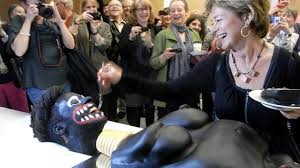 Now you know I have something to say about everything but this one has me stumped.
Sweden’s minister of culture, Lena Adelsohn Liljeroth, has been accused of racism after she become embroiled in a stunt involving a cake depicting a naked black woman. The art installation was reportedly meant to highlight the issue of female genital mutilation but attracted a furious response and accusations that the minister took part in ‘a racist spectacle’
Check it out:

Now some people have found this to be “racist”, Personally I find the video quite odd. First the idea that anyone would want to cut into a human shaped cake that looked like it was bleeding, that is screaming is already mind blowing, but the fact that they are so jovial about it, like it is an amusing sight, that is gives me pause. Something is hinky. To think that the artist The artist, Makode Aj Linde,

who created the installation for World Art Day on 15 April, (that’s him in as the cake’s head with his blackened face and head sticking up next to the cake’s stomach and arms) meant for the art installation to highlight the issue of female genital mutilation. Okay I kind of get that but… Then you are encouraging people to participate in the mutilation— okay edgy but what freaks me out is that they DID!!! 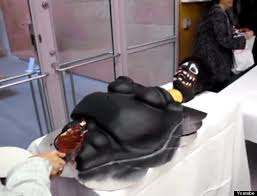 But is it RACISM that allowed them to see this merely as a stunt, and not a statement against the inhuman practice of genital mutilation on African women? My question is:

Would Ms. Adelsohn Liljeroth have so easily participated if someone had asked her to put human shaped cookie dough with the Star of David on them in an oven while a tape of wailing children was being played?

Would THAT have been amusing?

I know that Sweden has it’s racial issues, and that is being bandied about around this new development, and I know that Black folks get accused of being sensitive and paranoid, but I don’t know if I could cut into a human shaped cake, with a person screaming as I did it. I really would have found out distasteful and I would have first had to decline the invitation and then I would have asked for my coat. Sorry but I can’t picnic a at a lynching….
Here is more from the article hosted by: guardian.co.uk

Sweden’s minister of culture has been accused of racism after cutting a cake depicting a naked black woman.

Lena Adelsohn Liljeroth was taking part in an event at the Moderna Museet in Stockholm, the capital’s museum of modern art and home to works by Picasso and Dalí. She was invited to cut the cake, an art installation meant to highlight the issue of female genital mutilation. She began, as instructed, by taking a chunk from the cake’s “clitoris”.

The artist, Makode Aj Linde, who created the installation for World Art Day on 15 April, took part in the cake-cutting, with his blackened face and head sticking up next to the cake’s stomach and arms. The cakes “insides” were a gruesome red. A video shows him screaming loudly every time a visitor hacks off another slice of the cake.

Linde posted photos of the “genital mutilation cake” on his Facebook page. But the images provoked a furious response, with Sweden’s African-Swedish Association describing it as “a racist spectacle”. JUMP 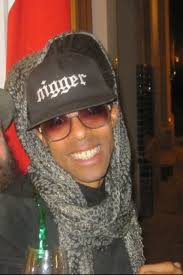