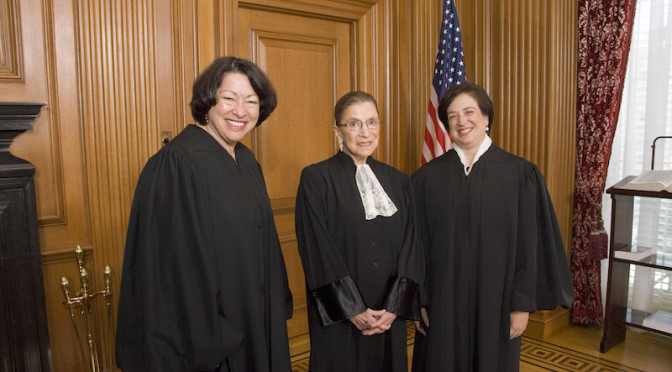 If was are not at the table we can not participate in the conversation, nor can you effect change. These women have a seat at the table and are putting to the screws to Texas’s solicitor general, Scott Keller  in the case of Texas’s HB2, a wide-ranging bill whose purpose is largely to regulate abortion providers into non-existence.  Jezebel.com posted this great article about the hearings, and I have to say reading the proceeding, and hearing these women systematically pick apart the  prejudicious arguments for regulating clinics that provide abortions is heartening. You have to read this!!!

Yesterday, the Supreme Court heard Whole Woman’s Health vs. Hellerstedt, a challenge to Texas’s HB2, a wide-ranging bill whose purpose is largely to regulate abortion providers into non-existence. From requiring clinics to abide by the same building codes as a surgical center, to requiring physicians to have admitting privileges in nearby hospitals, the TRAP laws have been successful with its intended goals; before HB2 went into effect Texas had 41 clinics, it now has 18. At stake yesterday was whether or not HB2 went too far, placing an “undue” burden on the women of Texas, many of whom drive hundreds of miles and take days off of work because the state’s mandatory waiting period.

And, to be clear, the stakes are high. If HB2 is allowed to stay in place, more clinics will close and more states will pass similar laws (Florida is slated to pass an omnibus bill similar to Texas’s). But as Dahlia Lithwick at Slate points out, there was one primary difference between yesterday’s arguments and 1992’s arguments in Planned Parenthood vs. Casey (the case that gave states the right to regulate abortion providers): namely, there are more women on the court.

During Casey, Sandra Day O’Connor was the lone woman on the court. Yesterday, Elana Kagan, Ruth Bader Ginsburg and Sonia Sotomayor relentlessly challenged the oft-repeated language that TRAP laws “protect women,” and that regulating abortion providers into the ground is the beneficence of the state.

It felt as if, for the first time in history, the gender playing field at the high court was finally leveled, and as a consequence the court’s female justices were emboldened to just ignore the rules. Time limits were flouted to such a degree that Chief Justice John Roberts pretty much gave up enforcing them. I counted two instances in which Roberts tried to get advocates to wrap up as Justices Ruth Bader Ginsburg and Sonia Sotomayor simply blew past him with more questions. There was something wonderful and symbolic about Roberts losing almost complete control over the court’s indignant women, who are just not inclined to play nice anymore.

Ginsburg, Kagan, and Sotomayor relentlessly challenged Texas’s argument, probing the state’s reasoning that regulating abortion providers was done solely out of concern for the well-being of women. Kagan pointed out that liposuction was more dangerous than abortion, and Sotomayor said to Scott Keller, Texas’s solicitor general, “According to you, the slightest health improvement … is enough to burden the lives of a million women.”

Sotomayor and Kagan volleyed back and forth, slowly unraveling the thinly-veiled argument that HB2 is really invested in the medical safety and protection of women. Lithwick writes:

Keller agrees. Then Kagan asks: “And I guess I just want to know, why would Texas do that?” The room erupts. Keller says complications. Kagan says that liposuction actually has greater complications. Keller says Kermit Gosnell. Kagan says nothing that happened in the Gosnell case could have occurred under Texas’ pre-existing regulations. Sotomayor says colonoscopies have more complications. Finally, Keller says, “But legislatures react to topics that are of public concern.” And that is what matters. Not women’s health. Politics.

Jump to Jezebel to read the rest