I have the pleasure of knowing Eric from his New York Dance Theatre of Harlem days…he was  baby back then, I watched him join ABT and cheered when he was  offered a contract with The Royal Ballet. I cheered for a number of reasons. the first is obvious, it is a huge accomplishment regardless of race, but on  another level it marked how far we-they [the Royal] have come. You see, when I was in DTH there was an English boy there named Adam James, he was black and had been trained in the Royal Academy where they flat out told him that where they would train him they would never hire him…that was in the 1980’s so it is a pleasure not only to witness Eric’s career blossom and for him to become such a beautiful artist, but also to see that is is so eloquent, insightful, downtown to earth and clear as well. I am so proud of him and I encourage all of you dancers to read this article regardless of race, gender or whatever, hear this artist’s voice!!!

Ballet corps are still the same identikit lineups. But, asks the Royal Ballet’s Eric Underwood, why should black dancers feel like the odd ones out? 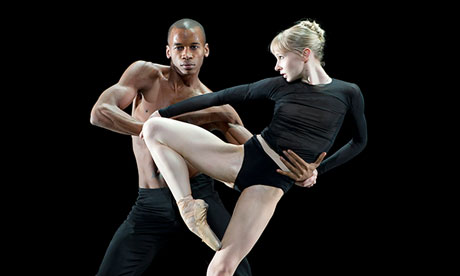 Right from the start of my career, I’ve noticed a lack of ethnic people in ballet. In a corps de ballet, especially for women, the idea is to be identical: you’re trying to move the same and not call attention to yourself. For someone who isn’t white, that’s difficult. You’re left with a choice: you have to either become so great a dancer that you’re not left in a chorus or a line, or embrace your beauty and hope others do, too – seeing it as beautiful, even if the symmetry is disturbed.

It wasn’t difficult for me to embrace myself, because I was born in Washington DC around lots of black people, so I grew up confident in the fact I was black. I never felt apologetic. Only as a ballet dancer did I even notice I was black – before that I was just Eric.

It’s important to embrace yourself and say:

“I’m beautiful – and if that person doesn’t see me as beautiful, then they’re mistaken, because I’m amazing and I’m such a great dancer that it’s undeniable that I’m able to do this.”

If you are different from ballet’s norm, you need to be better, too: physically, you need to be on another level, just to be accepted as the same. But you wouldn’t want them to be there simply because they are black – they need to be talented enough.

For a child coming into ballet, this is all very difficult. The only way to achieve it is to have the right amount of training, and for ballet to be something to which people can relate. In a lot of households, ballet isn’t seen as important, so it needs to be more mainstream – we need more TV shows that give children an incentive to dance. Parents need to be introduced to it, too, since confidence is fostered at home. If your parents are always saying you’re beautiful and wonderful, you go into a dance studio feeling great about yourself, and you’re able to overcome all obstacles. Even more important is to make ballet economically accessible, because lessons are incredibly expensive.

Through the Royal Ballet‘s Chance to Dance initiative, I go out to schools in Lambeth, in Loughborough Junction – into neighbourhoods where Londoners don’t have ballet – to assess whether children have the necessary physical attributes. I meet their parents, introduce them to ballet, and show them my dancing so I can say: “This is what a dancer is and it’s OK for you to try to become that.” And maybe even start a prize for young underprivileged dancers.

There also needs to be change in audience attitudes. A lot of ballet audiences, especially those who come for traditional pieces, tend to view ballet in a dated way. They’re not interested in it reflecting today’s society, but in maintaining the history and tradition of the form. Yet to go forward in today’s society, we have to go forward in ballet as well; the stage should reflect what you see on, say, the tube.

This means audiences have to change their view of what beauty is. A ballet audience looks at all the girls coming down the ramp in La Bayadère and sees they are all identical – same height, same skin colour, everything exactly the same. They find that incredibly beautiful. But they have to start thinking: “That person looks different – however, this is also incredibly beautiful.” This change needs to be collaborative. It takes a creative director to say that it’s beautiful; it takes an incredibly strong dancer to know that it’s beautiful and exude that on stage; and the audience has to not just see this dancer sticking out of the line, but to see the broken line as beautiful.

Ultimately, being black is an asset. If you’re in a setting where you’re different, celebrate that – it’s a wonderful thing. Your upbringing, your culture, the things that have enriched you that maybe other people didn’t have – you have to incorporate them into your dancing. Growing up in America in a black household, I danced at weekends, danced with my family – it was a large part of our culture. I would even have little dance contests with my sister and our neighbours. I’m able to incorporate that into my dancing because, before I started classical training, I had learned how to move. I don’t think it’s anything bad to be exoticised; if you’re exotic, embrace it and dance well. It’s an extra something to shape you as a dancer. Denying your race isn’t just bad for your mental health, it’s also ultimately unachievable.

Maybe one day there will be so many people from ethnic backgrounds dancing, none of this will even need to be thought about.