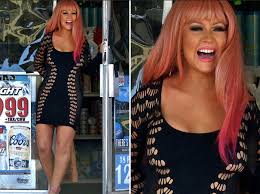 Christina Aguilera has had her ups and downs, and not just with her weight, she went from being a squeaky clean Disney star to a raunchy half dressed writhing soul singer, to mother, divorcee, to tipsy club guest, to the full figured judge on the hit she The Voice. It seems that all is forgivable, all except getting fat. When ever the blue eyed soul singer gets photographed it is her waistline and healthy booty that is the focus. However this does not deter her from wearing form strangling clothes. She is thick and happily unapologetic about it. Recently she gave the skinny on the record industry and how they control female singer’s images (their weight) and how much it is a part of their ability to present what is supposed to be the point—their art. 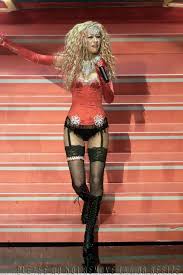 “During the promotion of my album Stripped [in 2002, left], I got tired of being a skinny, white girl, I am Ecuadorian but people felt so safe passing me off as a skinny, blue-eyed white girl.”

Truth be told even though her name is obviously Latin, how many of us thought she was your average corn feed WASP when she first came out? Remember she hit before it was chic to be Latina. We all know that the industry is known for white washing people, it was more shocking to think that this all American girl could sing like a Black woman who grew up in a Baptist church (Because we all know that all Black people learn to sing in the church wink wink)

“I had gained about 15 pounds during promotion and during my Stripped tour [with Justin Timberlake]. “They called this serious emergency meeting about how there was a lot of backlash about my weight. Basically, they told me I would affect a lot of people if I gained weight — the production, musical directors.”

Ok so her weight would affect a lot of people….humm well I can kind of get that because it’s so clear that when Barack Obama’s weight goes up unemployment reflects that!

She says the record company said “people I toured with would also miss out if I gained weight because I would sell no records or tickets for my shows.” She adds. “I was young, so I lost the weight quickly and was toothpick thin during Back to Basics promos and touring.”

It’s sad to think that grown men and women are manipulating young vulnerable girls who want to have music careers. Pimps they are pimps I tell you! The other thing that gets my goat is the fact that they didn’t bring in support for her to get “it under control” but just to tell her that she is fat and she has to to something about it or people will lose their jobs is just ill! It reminds me of the dance world. hummm. And the reality is she was probably just EATING and put on the weight that she had starved to keep off.

“I told them during this Lotus recording [her new album], ‘You are working with a fat girl. Know it now and get over it.’ They need a reminder sometimes that I don’t belong to them. It’s my body,” she says.

“My body can’t put anyone in jeopardy of not making money anymore — my body is just not on the table that way anymore.”

Now this is what I call a REVOLUTION! see… (sorry I know I keep taking digs at Gaga but it’s hard not to– I’ll get over it—soon)