After a viewer (well not even) wrote an email telling WKBT anchor Jennifer Livingston that she was a bad example to little girls because of her weight Livingston took to the airwaves to give him a piece of her mind, and told him that his email amounted to bullying. She so eloquently let HIM HAVE IT! What think is so interesting is the fact that for a long time news anchors and weather girls were supposed to look like sitting Barbie Dolls, pretty women who could read and point at a map, they were not allowed to be flawed or old (or bald) like their male counterparts, they needed to good at their jobs and be attractive. Well times are changing and there is greater diversity in the field which has allowed for different ages (or for female anchors to age) and be racially diverse yay! They can even work through their pregnancies (probably because that counter cuts off the image of their expanding waistlines) oh but wait, they still have to be attractive (I forgot). The diversity that is so wonderful that allows people of color to tell you what’s going on in the world also extends a person’s weight. Personally I like the fact that you can turn on your local news and see a person who looks like you Mom (maybe) or just a real woman addressing you. If this dude took 2 minutes to think about it he would have realized that there is a chubby girl out there who would love to be on television giving the news who upon seeing Jennifer Livingston believes that THAT can be a reality for you. Hey buddy that knife cuts both ways!!! Check out Livingston’s response PRICELESS! 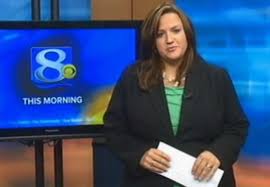